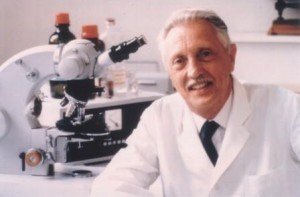 Clara Lejeune Gaymard has a “servant of God” as a father: Jerome Lejeune, the French geneticist who discovered the cause of Down syndrome.

Lejeune, who died in 1994 at age 67, was outspoken against legal abortion. He was named the first president of the Pontifical Academy for Life shortly before his death by Pope John Paul II.

Life Is a Blessing, A Biography of Jerome Lejeune, by Gaymard, was first published in 1997 in Paris. Subsequently, it was published in English by Ignatius Press — and has just been republished by The National Catholic Bioethics Center.

Why did you decide to write the book?

You know, my father died on Easter 1994, and I was pregnant with my daughter. She was No. 6 and was born 13 days after, and she was like the sunshine coming up after the death of my father. And looking at this little girl, I was thinking, She will never know her grandfather, so I have to write for her.

So I started to write the story of my father … because it was sad that he was dead, but all the good memories we had with him were good: He was a funny guy; he was always giving a lot of love, and so I wanted her to know about him. And, during the summer, I showed what I wrote to a journalist, and he told me, “You should make a book,” and this is the story of the book. It’s the story, only the very simple story, of a daughter who loves her father and wants to remember.

The love you have for your father is quite evident in the book; it brings him out as a family man as well as a scientist. What was the effect of this book? Do you think it had any effect on his cause for canonization?

I wouldn’t pretend that. What is very important for us is that, when he was alive, he took care of children with Down syndrome; he had a consultation with more than 5,000 patients, and he knew them, each of them, by the first name. The day before he died, I met him at the hospital, and he said to me, “You know, I’m not afraid to leave, but I’m sad for my patients, because they won’t understand why I should be the one who tried to save them, and I abandoned them.” So I told him, “You know they will understand; they understand better than we do.” And he told me, “No, they don’t understand better than we do, but deeper.”

So, when I came back home with my sister, my brother and my mom, we said, “We have to continue his work.” So we decided to create, at first, an association, and then a foundation, so we could cure the children and put as much money as we could to continue the research that he wanted to do.

So, that is the purpose of Foundation Lejeune — you do medical research, funding, and you also have a clinic?

Yes, we have a clinic, and we have a lot of Down syndrome children in Europe, so there are a lot of new patients who are coming in. But the eldest is 72, so we have a large range of patients coming. Some are doing fine; some are sick. The purpose is that my father was convinced that there is a strong connection between research and clinic, and they find that in many systems you become a researcher and you forget the clinic, and it’s a big mistake, and he wanted to keep the relationship between clinical practice and research. So it’s what we have done in the foundation, the consultation, so that you can observe the patient and help them and also finance and do the research.

You yourself do not work full time for the foundation.

What are the speeches that you are giving in New York today [Jan. 15]?

You know, this is a kind of miracle. We thought that it was a good idea to create a foundation here in the U.S., because we are giving quite a lot of money to scientists here: We have already financed 61 projects, and 30 teams in the U.S., so we felt it was the right time to start something here. The “New York Encounter” team contacted us and said it would be a good time for me to speak about my father. I hope that today we will remember in a couple of years that it was the day that the Foundation Jerome Lejeune started in the U.S.

Tell me about your family.

My husband is a politician. He has been minister … of health, minister of economy and finance and minister of agriculture too. Now he is head of a region in France, and he’s also a member of Parliament. He’s traveling a lot in France, and I’m traveling abroad, so we joke about it. Our children live in Paris. They are between 23 and 12; they are very close, so we are really a team. They do very diverse things: One is a publisher; one is a journalist; one studies archeology; one is working in movies and cinema; one is an artist, and she sings; and the other is in political science, and the three youngest are still in school.

Since your book is being republished, have you ever considered giving movie rights to, let’s say, a Catholic movie company to do a biopic?

Ahhh, I would love to, if someone asked me.

I believe it’s a story made for a movie.

Yes, I think it is, because, you know, my father, he was a gifted man — really, he was very clever, and he was very handsome. He was the kind of man you love. You know, I’m traveling all the time — I’m in economics and business — and every time I am traveling, I meet someone who has met my father. He was the kind of guy that, when you meet him once, you would never forget him. And he had a beautiful career. He was a scientist; he made a big discovery; he became the first geneticist in France, very young, the top of the newspapers, advisor to the president; and one day, he decided, “I cannot accept abortion,” not because he is Christian, but because he knows as a geneticist that life starts at conception. And he had to say it. He had to protect the ones whom they want to kill, who are too young to protect themselves.

So he started this fight as a scientist, saying, “I have to tell the truth. I’m not judging anyone; I’m not saying anything else besides the truth of the science, and I have to testify about that.”

Do you remember that when you were growing up?

I remember it so clearly. I was 10 years old, and, one day, he came home for lunch. The day before, on television, there was a movie about a family where a woman had a child with Down syndrome, and she wanted to abort, and she couldn’t do it then.

After, there was a debate about abortion of the diseased children, and a boy came to his consultation with his mom, and he was crying, and my father said, “Why are you crying?” And his mother said, “He saw the movie, and I couldn’t stop him crying,” and then he jumped in my father’s arms, and he was only 10 with Down syndrome. He said, “You know, they want to kill us. And you have to save us, because we are too weak, and we can’t do anything.” And [my father]came back home for lunch, and he was white, and he said, “If I don’t protect them, I am nothing.” That’s how it started.

And then his career came down. He didn’t have money for his research. He was like a pariah, and so on, but he accepted that because he thought he was doing that which was his duty.

But it affected you as children as well. You were very fearful, no?

I wouldn’t use that word. He never put it as a drama. He didn’t say, “It’s terrible.” Mama was very supportive of him, the fact that we had a father who only said what science said. Okay, he had a lot of critics, people who were blaming him and saying horrible things about him, but since we knew him and that he was just doing what he had to do, we had a respect and love for him. We accepted the fact that we were also pariahs at school. But we took it like we were a very normal family.

So, you never resented the extra suffering that it might have caused the family?

That kind of thing doesn’t happen much anymore, but it’s because it wasn’t my place. I have a very nice position here as well. I am very happy in GE, so that’s good.

What do you hope will happen as a result of your book being republished?

First of all, I am very grateful to the people who took so much energy and courage to publish it again. I hope that, first of all, it would give hope to people, because this book is the story of a family. And what has happened since I published this book in France is that I received about 2,000 letters. One woman told me she read the book to a blind priest who was going to die and wanted this book to be read before he died. Another woman wanted to tell me the story she had with her father. Another time, it was a young girl of 15 who said, “I want to do the same job as your father.”

It can speak to the hearts of the people who read it, and they feel that, in many cases, they have lived the same things, because, hopefully, in most of the families, parents love the children, the children love the parents, so that the book is just the story of a normal life — so they can be reminded of the good and bad times they had, the sense of humanity which is starting with the family. If they can raise their heads and say, “I’m not alone; everything is possible — and I can do it.”

Are there any recorded miracles from people who have prayed for your father’s intercession?

Many people are saying that praying to him has changed their lives, but we don’t have any medical miracles yet.