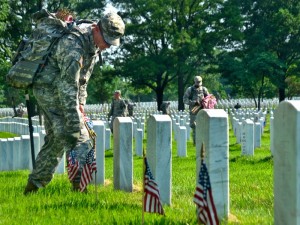 There is an old country graveyard near the town where I live. For years the small Clearwater Cemetery was all but forgotten and neglected. In the middle of that graveyard lies the forlorn grave of a young soldier who died six days before the end of the First World War.

The decrepit fence surrounding the grave implies he was deeply loved but eventually forgotten, except by God. Some parents’ son almost made it through the war. He’s been dead for 96 years. Anybody who knew and loved him is gone. We can not actually remember him or the thousands upon thousands of soldiers who died in the Great War.

They were so young (average age was 18-22 years). We can not remember them but we can be grateful for their ultimate sacrifice. American President Woodrow Wilson said World War I was the war to end all wars. How wrong he was.

Twenty-one years later World War II began. The veterans who survived that awful war are mostly gone now too; those who remain are aged. We can remember them — and those who fought in wars since then.

Many of my generation’s sons were killed or crippled in the Gulf War, Afghanistan and elsewhere. We remember and honour them. Most recently, Corporal Nathan Cirillo (24) was killed by a terrorist while he stood guard at the Tomb of the Unknown Soldier in Ottawa.

Yesterday I came across some actual film footage from a battle of World War 1. It made me think of the forgotten soldier’s grave in Clearwater Cemetery near Beaumont, Alberta, Canada. See video below.