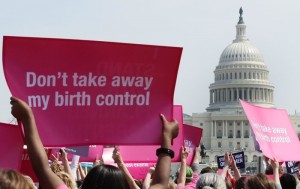 has adopted a strategy driven by blind partisanship, electing to burn bridges instead of building them. That strategy is damaging, and possibly imperiling, its mission. …

Planned Parenthood sees ideological purity as so paramount that it permeates every aspect of its strategic planning. There is almost no room for even slight deviations. Those who are not in lock step with the organization are viewed as enemies to the cause.

Apparently Brown thinks this is harming the organization, but I would beg to differ. A recent news headline from Indiana makes my point for me: “Medicaid official rules against Indiana abortion law.” This ruling came about because, according to news reports, the law “would keep low-income women from using federal Medicaid benefits to receive any kind of reproductive medical care from Planned Parenthood.” It is argued that the law “denies women the freedom to choose their health care providers.”

This past June, the Centers for Medicare and Medicaid Services (CMS) of the Department of Health and Human Services ruled that the state law—which would alter the way Medicaid is run in Indiana—violates federal laws, rendering it unacceptable. Further, it was argued that, “Federal law already bans women from using Medicaid to pay for abortions, but the Indiana law, signed in 2011 by Gov. Mitch Daniels, had been designed to prevent Planned Parenthood from performing abortions, since it would lose all Medicaid funds.”

So what happened in this case? As Governor Daniels was preparing to sign the proposal into law in 2010, Stop Planned Parenthood International opined,

Unfortunately, Governor Daniels stated in a press release, “Any organization affected by this provision can resume receiving taxpayer dollars immediately by ceasing or separating its operations that perform abortions.”

So, presumably, all Planned Parenthood would have to do to continue receiving funding would be to “separate” its abortion business from its other business. No details are provided as to what that separation would entail, but we know that, in Texas, Planned Parenthood has physically split its abortion business in some locales by utilizing separate facilities, or even separate hallways or rooms of the same facility. Even though the facilities may be physically separate, in some locations they share staff and expenses.

Hospitals and ambulatory surgical centers are specifically excepted from the provisions of the Indiana “Abortion Matters” Act.

Sadly, this compromise in the actual law itself provided the fodder the government’s Medicaid official needed to rule the law unacceptable. Had the state legislature done the right thing in the beginning and provided no caveats for the abortion cartel, the outcome may have been different. We will never know.

But it does prove a point. After years of working at forming public opinion through early and frequent brainwashing in the classrooms of America, Planned Parenthood has succeeded in influencing public policies that confirm its belief that anything having to do with conceiving a child is a mechanical function of the body and nothing more. The result, at least in Indiana, is that Planned Parenthood is welcome to surgically, medically, and chemically kill pre-born children—and maim mothers—with impunity. Planned Parenthood’s “reproductive choice” business will proceed unscathed, regardless of the carnage left behind.

It is very clear that “reproductive choice” is the national raison d’être for deadly practices that treat men and women more like machines than the people God created them to be. If we are to stop Planned Parenthood, we must stop its influence—and we can only do that by changing the way people think about their bodies, sexuality, and reproduction.