Trending Now
You are at:Home»Featured»Right in Our Own Eyes
By Ken Connor on August 29, 2011 Featured, Government & Politics 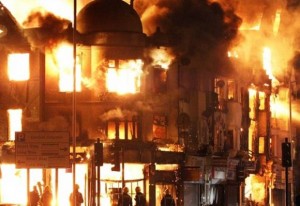 You have to hand it to the British… they don’t mince words.  Speaking of the violent civil unrest that erupted across London in recent weeks, Prime Minister David Cameron offered a frank assessment of the motives — or lack thereof — behind the chaos:

In America and most of the western world, where political correctness rules, such conclusions strike a dissonant chord.  How dare Mr. Cameron dismiss the certain sociological, cultural, and political underpinnings of the civil unrest!  How dare he ignore the obvious culpability that he and the rest of the government bear for inciting what is clearly just a cry for help from London’s masses?  What’s needed is a study, not a crackdown!  These people need help in the form of government assistance, and above all, understanding.

Of course, this is balderdash, and Mr. Cameron deserves credit for saying so.  He is absolutely correct when he says that the reigning cult of moral relativism that has begun to erode civil society from the inside out must be countermanded.  Champions of a postmodern society in which “anything goes” like to imagine they are advocating a noble and just view of human liberty and dignity, but in their quest for absolute autonomy, they cast aside the moral obligations inherent to our humanity.

What more can we expect from a society that increasingly embraces a materialist worldview, in which man is not a Created Being but a biochemical product of random chance?  Having rejected the idea of any metaphysical significance, the only thing left to define human society and the individuals that comprise it is the material world, where virtue is moot,  might makes right, and values are in the eyes of the beholder.  In such a world, there is no basis for rational discourse.  Everything in the moral arena is subject to dispute; it’s all relative, whatever floats your boat.  All we can know is that which can be quantified and verified, and since we can do neither with so-called moral and spiritual truths, there are no absolutes in those arenas of life.

Therefore, if you feel unhappy about your life, or are merely bored and decide you don’t want to work but would prefer to riot in the streets, assault peace officers and violate private property, who’s to tell you that it’s wrong?  Who’s to tell you that you ought to respect the rule of law regardless of how you feel about it at the time, or whether there is anyone to stop you from breaking it?

Our culture is paying a price for such nonsense.  As we lose our cultural consensus on basic questions of right and wrong, the fabric of society is unraveling. There was a time, not too long ago, when shared cultural conceptions forged the basis for our interactions with others and the way we ordered ourselves.  It was understood that there is a God to whom every man is ultimately accountable; that human beings are created in God’s image and of infinite worth, value and dignity and that we should treat each other as such; that because of our special nature, we have been endowed with unalienable rights by our Creator; that government exists to secure those rights and is to operate with the consent of the governed.

Because this consensus was widely shared, ordered liberty flourished and the role of government was limited.  Thanks to notions of moral relativism however, the social consensus is unwinding.  As Mr. Cameron has pointed out, notions of radical individualism are prevailing and we are losing any sense of larger social obligations.  If it feels good do it; if the baby is inconvenient, kill it; if you want it take it; if you want to marry it, be my guest!  As the social consensus erodes, chaos ensues until ultimately, the people look to government to restore order and Hobbes’ Leviathan is born.

It’s not too late to turn things around, but it will take a monumental effort on the part of every person to live lives of responsibility, dignity, and virtue and to teach their children to do the same.  Failing this, we’re slowly but surely weaving the web of our own destruction.