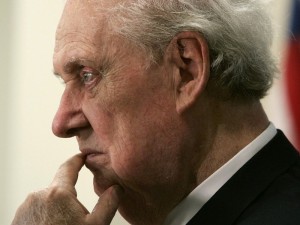 On a dark February afternoon in 1988, 25 students in a U.S. Constitutional History class waited expectantly in a little-used dining hall on the campus of Grove City College (in Grove City, Pennsylvania) for a special guest lecturer to arrive. I was the professor in charge of that class. Through the doors of that meeting place came Judge Robert Bork, failed Reagan nominee to the U.S. Supreme Court. Judge Bork, our special visitor, was on campus to deliver, that evening, the first public lecture following his controversial confirmation hearings of some months before. He was escorted by Pittsburgh lawyer and college trustee, Richard G. Jewell. Judge Bork had graciously agreed to meet with the students, most of them pre-law, to answer questions about his view of the Constitution and about law in general. As he entered, the students stood and applauded, a reception that Bork had not received from the Senate Judiciary Committee.

He explained, to the GCC students assembled, his view of constitutional interpretation, which was a view held by most jurists until the impact of Progressivism and Legal Realism on the Court in the early 20th century. It was simple and straight forward. In interpreting a constitutional provision, one must be guided by the intent of the Founders or drafters. Judges should endeavor to determine, as best they could, what those who wrote the provisions intended to convey to future generations. Judges should not be activists, substituting their own views for those of the Founders. If the Constitution were to be deemed outmoded in some respect, it was up to the people and their representatives to use the amendment process to alter it. Changing its meaning was not the proper function of the judiciary. Bork was direct, clear and self-deprecating in that hour with GCC students.

That evening, before a packed basketball arena on the Grove City College campus, Bork spoke to a crowd of 2,500. He was introduced by a young lawyer from Pittsburgh who had escorted him earlier and was later to become the college’s eighth president, Richard G. Jewell. In introducing him, Jewell rehearsed Bork’s record of achievement as an undergrad at the University of Chicago and a law student a Yale, his years as a law professor, his work as Solicitor General, and his service on the D.C. Court of Appeals. When Bork rose to speak, he was greeted with loud and long applause.

He pulled no punches about what he had been subjected to by Senator Ted Kennedy and the Judiciary Committee. Readers may remember the tone of attack set by Senator Kennedy before the hearing had begun. Kennedy said: “Robert Bork’s America is a land in which women would be forced into back-alley abortions, blacks would sit at segregated lunch counters, rogue police could break down citizens’ doors in midnight raids, schoolchildren could not be taught about evolution.” Bork responded to the vitriol in his campus address. He said, “Kennedy painted a nightmare of fascist repression and attributed it to me … We should have realized, but we did not, that the entire campaign would be pitched at this level.” Bork’s careful advocacy of intentionalism, his regard for the rights of states against federal intrusion, his conviction that the Constitution did not contain an expansive right to privacy, were all distorted into a bizarre series of claims that eventually resulted in his nomination being rejected by the Senate. In fact the gross and unfair vilification of a judicial nominee was so obvious to most over time that it gave birth to a new term—being “Borked.”

Having resigned his judgeship on the D.C. Court of Appeals, now free to express his opposition to the judicial activism that he believed was infecting the courts on all levels, his Grove City College talk contained the central theme that would later emerge in a more elaborate form in two key, best-selling books—“The Tempting of America: The Political Seduction of the Law” and “Slouching Toward Gomorrah: Modern Liberalism and American Decline.” There he set out a robust conservative philosophy of judicial interpretation which continues to impact constitutional decision-making today.

And what about current students in my two-semester course on U.S. Constitutional History? They have always read and will continue to read Judge Bork’s presentation delivered to a University of San Diego Law School audience. There he said: “I intend to speak to the question of whether a judge should consider himself or herself bound by the original intentions of those who framed, proposed and ratified the Constitution. I think the judge is so bound. I want to demonstrate that original intent is the only legitimate basis for constitutional decision … only by limiting themselves to the historic intentions underlying each clause of the Constitution can judges avoid becoming legislators … and ensure that the Constitution is law.” Bork dedicated the rest of his intellectual life to that and related propositions. By so doing he helped to thwart the assault on the integrity of the U.S. Constitution.