Trending Now
You are at:Home»Columnists»Rorschach Test for our Attitudes on Religion
By Colleen Carroll Campbell on December 23, 2011 Columnists, Featured, Sports 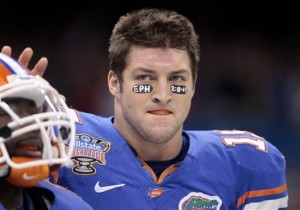 Tim Tebow haters finally scored on Sunday, when the 23-year-old novice quarterback for the Denver Broncos succumbed to defeat at the hands of 34-year-old Super Bowl veteran and New England Patriots powerhouse Tom Brady. Prior to that 41-23 loss, Tebow had been on an improbable six-game winning streak, pulling off one miraculous fourth-quarter finish after another despite abysmal first-half performances and anemic passing stats. Even more improbable than Tebow’s victories was the attention he attracted — positive and, especially, negative — as he marched from triumph to triumph with a grin on his face and a prayer on his lips.

That this former Heisman Trophy winner and famously devout evangelical Christian quarterback has become a Rorschach test for our attitudes on religion in public life was never more apparent than in the wake of Sunday’s game, when Tebow’s feverish detractors rushed to the airwaves and blogosphere to exult in his defeat. Tebow’s unexpected success, and his habit of publicly thanking Jesus Christ for it at every opportunity, drove his critics crazy. His loss on Sunday restored their sense of cosmic justice — not that they believe in such nonsense.

At one level, it’s unsurprising that an athlete who has sparked such intense media coverage and enthusiasm from fans also would stir intense backlash from skeptics. Tebowmania, as it has been dubbed, has cascaded down the Front Range and across America this fall, inspiring everything from multiple Tebow cover photos in Sports Illustrated to an eponymous beer (Tebrew, made by Colorado-based Bonfire Brewing) and even the coinage of a new word, complete with its own website (Tebowing.com), to describe the quarterback’s habit of taking a knee for impromptu prayers on the football field.

Fans of Tebow’s cheerful, confident, overtly faith-based approach to football and life may be legion, but so are his detractors. From those broadcasters and sports writers who greet his every win with angry rants about why statistics still prove him a loser to resentful NFL competitors who mock him as an overhyped goody-two-shoes and the armchair quarterbacks who blame his public professions of faith for violating some mythical separation of church and sport, there is no shortage of Americans for whom Tebow is not merely an irritation but a provocation.

Some Tebow critics regard him as even more ominous — a threat to the very fabric of our pluralistic society. In a recent edition of Jewish Week, columnist Rabbi Joshua Hammerman lamented Tebow’s habit of publicly praising Jesus and warned that a Super Bowl ring for Tebow could spark deadly sectarian violence among his Christian fans.

“If Tebow wins the Super Bowl, against all odds, it will buoy his faithful,” Hammerman wrote, “and emboldened faithful can do insane things, like burning mosques, bashing gays and indiscriminately banishing immigrants.”

Both Jewish Week and Hammerman later apologized for the column, but its apocalyptic overtones proved just how irrational Tebowphobia has become — and how harsh the blowback can be against an outspoken, traditionally minded Christian who refuses to quarantine his faith from his public life.

It is odd that the clean-cut, perpetually grinning preacher’s son who spends his summers caring for orphans and publicly touts his plan to eschew premarital sex inspires such widespread fear and loathing, given how forgiving Tebow’s critics often are of the thuggery common in the NFL. Pundits horrified by Tebow’s pious persona have shown far less alarm at the antics of such gridiron stars as Brett Favre, caught harassing a female television commentator with unsolicited pictures of his private parts; Adam Jones, connected to multiple violent episodes in strip clubs; and Ben Roethlisberger, implicated, though not charged, in two sexual assaults. Doping, drunk driving, beating women, abusing dogs — you name it and there is an NFL star who has been caught doing it, only to issue a cursory apology, serve his time (or not) and scamper back to the huddle, usually to raucous public applause. But Tebow opens press conferences with praise for God and ends touchdown drives with genuflections of thanksgiving? Now that crosses the line.

In the end, both Tebowmania and Tebowphobia say far more about us than about this rookie quarterback. Tebowphobia tells us that for all our pretense to tolerance in 21st century America, many Americans harbor little tolerance for public figures who take their religious commitments too seriously, elaborate on them too specifically or live them too publicly — especially when those commitments are connected to traditional moral values.

As for Tebowmania, it reminds us that Americans are still hungry for heroes, still inspired by leaders whose optimism and grit allow them to overcome great odds and still captivated by that rare professional athlete who plays for love of the game while remembering that it’s not all about him and it is, at the end of the day, just a game. Tebow’s football star soon may fade, but the truth he has revealed to us — both about ourselves and about the power of an authentically lived faith to capture the imagination — will endure.