Trending Now
You are at:Home»Featured»Russia – “If You Want to Find God, Then Go to the Children’s Hospice”
By ACN-USA News on October 28, 2013 Featured, Those in Need 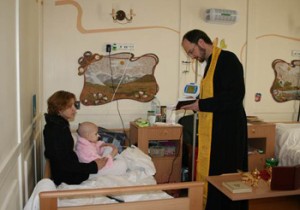 The first ever hospice in Russia for children with terminal illnesses is celebrating its 10th anniversary this year.

The project was started by the Russian Orthodox priest Aleksandr Tkachenko, who came recently to visit the international headquarters of the Catholic pastoral charity Aid to the Church in Need (ACN) in the town of Königstein, near Frankfurt, Germany, to say thank you for the support supplied by ACN for the start of this project.

“Thanks to your help we have been able and continue to be able to do a great deal for a great many people,” the priest said. “We Orthodox and Catholic Christians are united in our love of God and neighbor. It is our vocation to pass on to others the love of Christ.”

The hospice was founded in 2003 as a response to the needs of terminally ill children and their families, who until then had not received any kind of adequate help in Russia.

Father Tkachenko, who had done special training in the United States as a hospital chaplain, recognized that “something needs to be done in this field as soon as possible in Russia, too.”

An institution was established, in collaboration with specialist doctors and psychologists, where “terminally ill children can be helped to play and to learn and to live a full life, right up to the end.”

At the same time, families who are caring for their sick children at home are provided with medical, psychological and pastoral support. The pastoral aspect is especially important, Father Alexander observes.

“We don’t preach at the sick bed, but in such a situation people come to us with so many profound questions, and as priests, we try to help them to find inner peace.”

He explains that the priests are not there “to lecture” such children, but can instead “learn from them.” Such terminally ill children have “a deep awareness of God” and by their experience in confronting death actually become “teachers of the priests.”

Last year, Russian Orthodox Patriarch Kirill had visited the hospice on his birthday. “Although he was only meant to be visiting for ten minutes and had important people waiting for him, he extended his visit to 2 hours.”

Afterwards, the Patriarch told journalists, “If you want to find God, then go to visit the children’s hospice.”

Now another such children’s hospice is being established in the Moscow region, at the express request of the Patriarch. Once again it is being supported by ACN.

Speaking to ACN, Father Tkachenko emphasised the fact that both Pope Francis and the Russian Orthodox Patriarch were in agreement that the Church must minister to society.

“She must not simply build churches, but must be committed to people,” he said.

“I like Pope Francis very much, because he is pastoral in a natural way. He is someone who even as a bishop went about on foot and helped people. That’s something I like.”