Trending Now
You are at:Home»Featured»Sabotaging the Medjugorje Commission?
By Kevin Symonds on February 4, 2013 Featured, Live in Christ 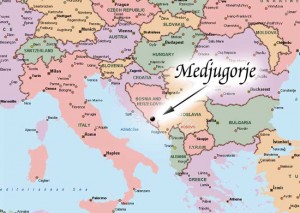 From June, 1981 to the present, six people from Medjugorje (Bosnia-Hercegovina) have been claiming to see the Virgin Mary.  Over these 31 or so years, much controversy has arisen concerning the origin of these claims.  Lies, scandal, slander, disobedience and accusations that the alleged visionaries are being handled by the local Franciscans form a forgotten (and covered-up) side of Medjugorje’s history.

From the local Ordinary to the Episcopal Conference, the authority of the Church has never established a supernatural character for Medjugorje.  In fact, negative judgments have been rendered by the competent ecclesiastical authorities.  Despite this, people continue to go to Medjugorje, attributing to it their own subjective judgment that events associated with it and with the alleged visionaries’ messages are of a supernatural character.

Out of concern for a matter that can be said to affect a broad portion of the Church, the Holy See intervened and established a commission in March, 2010 to investigate the claims.  This commission will investigate the facts and submit its findings to the Holy Father, who, in turn, will render a final and authoritative judgment.

Recent events coming out of or related to Medjugorje have prompted me to ask a very serious question: Is pressure being applied to the commission by the alleged Medjugorje visionaries and their promoters?

Just prior to the announcement of the Holy See’s commission, there appears to be what Jakob Marschner of Medjugorje Today calls a “Medjugorje boom” in Italy.  In the same article, Marschner attributes this to a Paolo Brosio, who claims to have renounced a lifestyle of sin in favor of Medjugorje and from 2009 onwards has been promoting Medjugorje.

Marschner’s remarks are largely about Italians travelling to Medjugorje but this does not exclude the many appearances and talks for the visionaries in Italy.  According to the news archive on Marschner’s web site, from 2011–2012, there were no less than 17 such appearances.[i]  Other trips were made to Ireland and the United States.  It is such that the local economy has been boosted by Medjugorje pilgrimages from Italy with a new traffic venue for Italian pilgrims.  A new road system is also expected to benefit from the flow of Medjugorje pilgrims.

Now it has been released a further initiative entitled “Maranatha” has begun, this time in the Holy Land and involving Archbishop André Léonard of Brussels, Belgium and alleged visionary Vicka Ivankovic-Mijatovic.  This event is slated to take place in the latter half of August, 2013.

The timeline of events indicates the initial spike in pilgrimages and speaking engagements appears to be coincidental.  However, it is the continued spike after the announcement of the commission that leaves me pondering what effect this could have upon the commission and/or its decision.  Most notably, it could be argued that pressure (especially media pressure) is being applied.

One may attempt to refute the above observation on the grounds that the appearances of the alleged visionaries are consistent with the past 30 or so years.  However, this argument does not consider that the playing field has changed.  There is a commission—centered in Italy—investigating whether or not Medjugorje is supernatural.

Spreading and promoting alleged messages and secrets in the very region where they will be definitively judged can be seen as most unwise.  It looks dangerously close to politicking and stirring up support for the cause at a decisive moment in Medjugorje’s history.  What are the faithful to think if a negative judgment were to be rendered?  The timing of events could very well provide a ripe opportunity for confusion and disillusionment among the faithful.[ii]

Another observation concerns recent remarks made by a priest associated with Mirjana Dragicevic-Soldo.  Marschner reports that Fr. Petar Ljubicic (the priest to whom Mirjana has charged with the revealing of each “secret”) has alleged the first two or three alleged secrets will take place in Medjugorje.  Furthermore, they will be of “paramount importance” for the Church to recognize the alleged apparitions.

For years a sign in Medjugorje has been promised  and the “secrets” of Medjugorje have continually been cited to this effect.  One cannot help but get the impression while reading the Medjugorje literature that these alleged secrets are touted as an ultimate weapon that will silence Medjugorje’s critics.  For nearly 30 years, the alleged secrets have been continuously dangled like a carrot on a stick for those who sincerely believe in Medjugorje and the “secrets” are now being used in the context of the commission.

For 30 years, Medjugorje has hung its hat on these alleged secrets and their fulfillment.  Can Medjugorje produce evidence of Medjugorje’s authenticity apart from sensationalistic secrets?  In response to such questions, Medjugorje apologists will cite numerous conversions.  This, too, does not consider the fact that the local Ordinary has already addressed the theological underpinnings of this argument.

Given that promises of signs and wonders continue without fulfillment, is it possible that Medjugorje is stringing people along in an effort to make the claims continue indefinitely?  In posing this question, we need to remember a basic tenet of the Church’s theology of private revelation.  The Church cannot rule positively while an alleged apparition is still happening, however, it can rule negatively with on-going claims.[iii]

Marija Pavlovic-Lunetti stated the Church will not approve Medjugorje until all the Medjugorje “visionaries” are dead.[iv]  If a prophetic character can be ascribed to her claim, then the Holy See’s commission may have a long road ahead of some 30-40 years.  This figure is based upon the age of the alleged visionaries and barring any sort of unexpected deaths.  Given this projection, the theory that the faithful are being strung along may have some merit.

If the above is not enough, the faithful are told theological ditties like “God’s time is not our time” or “I do not know Our Lady’s plan.”  Another excuse is, “this is an extraordinary period in human history and God is extending the period of mercy.”  Is this anything less than an abuse of faith and advantage-taking of people’s good will?

One can only wonder why people continue to believe in Medjugorje after being treated like this.  I submit that it proves the power the alleged visionaries have over their followers and demonstrates a sensationalistic moniker has been given to their alleged secrets.  Indeed, if a negative judgment were to be rendered on Medjugorje by the Holy See’s commission, two roads stand before the faithful: dissent or obedience.  There is no middle ground.

[i] This is especially seen in “visionary” Marija Pavlovic-Lunetti who lives in Italy.  However, other “visionaries” have made appearances as well.

[ii] It must be borne in mind these putative visionaries are people who, after 30 years, have had ample time to perfect their craft.  To understand this better, Donal Anthony Foley’s book Medjugorje Revisited is very helpful.  For our purposes here, the “visionaries” are not so good at their craft that they do not occasionally slip-up and demonstrate they are influenced by popular interpretations and opinions instead of well-reasoned logic and established facts.  For one such example, please see endnote 4.

[iii] If the Medjugorje commission is going to issue a ruling soon, as Marschner indicates, then it seems likely that such a verdict cannot be positive.

[iv] The “prophetic” nature of this statement is certainly under question as Lunetti seems to have mistaken her facts.  She says the following, “The act of forming the Commission was a positive act. The Church is often not interested in the sensations. It has its own position and is not in a hurry. It took decades until the official recognition of the shrine in Lourdes or Fatima. So it is with Medjugorje. I am convinced that the Vatican recognizes the authenticity of the apparitions, but only when they stop and when we visionaries have died.”

Fátima was declared to be supernatural in origin on October, 1930—13 years after Our Lady’s last appearance and the Miracle of the Sun.  Lourdes was approved 4 years after it ended in 1858 and its basilica was consecrated in 1876.  While Lunetti does not speak to this fact, it is also to be noted that both Fátima and Lourdes were approved while their respective visionaries, Sr. Lúcia dos Santos and St. Bernadette, were still living.