Trending Now
You are at:Home»Featured»Sad Anniversary for Women Religious Stranded in Kurdistan
By ACN-USA News on August 6, 2015 Featured, Those in Need, Vocations 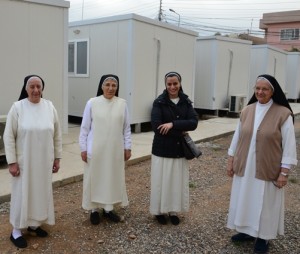 NEW YORK—August 6, 2015 marks the one-year anniversary of the expulsion from their convent of a group of Dominican sisters who had been serving Christians on Iraq’s Nineveh Plane for many years. That day, ISIS forced the women religious into exile in Erbil, capital of Kurdistan.

Discovering that Kurdish militia had fled the ISIS assault, the sisters decided to leave their convent in Qaraqosh and march to safety along with thousands of refugees; they had just 30 minutes to pack their things. “We were panicked when they told us ISIS had gotten into the roads, so many people left with even just their nightgowns on,” recalled Sister Lyca.

“From 11:30 at night to the next morning we marched without any food or water,” Sister Diana said, adding: “we’re talking about August when the heat is unbearable: 100 degree temperatures, with no water.” The effects of exhaustion and dehydration were compounded by horrible sights that left powerful impressions on the sisters. “When we got into the streets we saw thousands and thousands of people marching, cars and people walking,” Sister Diana said: “Cars meant for five people held eight to ten. We heard children shouting and crying, very afraid.”

“When we got [to Erbil], it was even more horrible to see people scattered everywhere like sheep without a shepherd,” Sister Diana said. “Some of these people had left behind mansions. They had so much. So much, and in just a few hours they became homeless. We began to realize that our displacement might not last days, but that it could take years and years.”

Ever since, the Church has provided the refugees with humanitarian aid, eventually settling many thousands in apartments and opening a number of schools. But the community’s needs go well beyond the material: “We lost our dignity here. We have been humiliated in so many ways,” Sister Diana said. “We are living day-by-day, but the fact is that deep down, this is not the way that human beings should live. We’re living, but it’s like living in a cage. We don’t have the power or strength to stretch our wings where we want.”

The sisters worry their efforts are not enough. “Our kids come to school for two or three hours a day. It’s nothing. Our college students are deprived of the chance to continue their studies. What ISIS is doing to us is killing a new generation, because if this generation does not get educated, neither will the next one,” said Sister Diana. On top of this, hospitals lack the facilities to deal with all their patients, and there are concerns that the flow of aid may not last. “To the government and even the United Nations, we’re just numbers. We’re not considered as human beings,” Sister Diana charged.

The sisters remain hopeful—despite the odds: “We have brought all these things into our prayers,” Sister Huda said. “This is my faith. God is with us. God saved us when we came here. We want to thank all the people who think of us and who are helping us.”