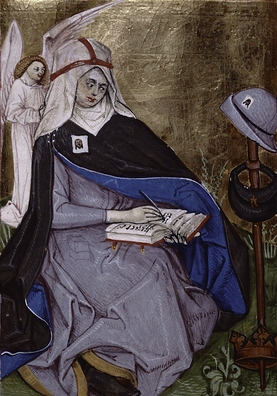 ST. BRIDGET was born of the Swedish royal family, in 1304. In obedience to her father, she was married to Prince Ulpho of Sweden, and became the mother of eight children, one of whom, Catherine, is honored as a Saint.

After some years she and her husband separated by mutual consent. He entered the Cistercian Order, and Bridget founded the Order of St. Saviour, in the Abbey of Wastein, in Sweden.

In 1344 she became a widow, and thenceforth received a series of the most sublime revelations, all of which she scrupulously submitted to the judgment of her confessor. By the command of Our Lord, Bridget went on a pilgrimage to the Holy Land, and amidst the very scenes of the Passion was further instructed in the sacred mysteries. She died in 1373.

Reflection.—”Is confession a matter of much time or expense?” asks St. John Chrysostom. “Is it a difficult and painful remedy? Without cost or hurt, the medicine is ever ready to restore you to perfect health.”