Trending Now
You are at:Home»Featured»Saving Mr. Who?
By Sr. Helena Burns, fsp on March 17, 2014 Featured, On TV and Movies 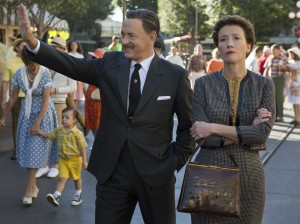 Are we all agreed that Saving Mr. Banks is the Worst. Movie. Title. Ever? Good.

First: Who is Mr. Banks? He’s the father of the little family in Mary Poppins, and the filmmakers must have assumed that we all had massive group recollection on that one. Second: “Banks” rhymes with “Hanks” who plays Walt Disney. Third: Tom Hanks was in the movie “Saving Private Ryan.” All so bloody confusing.

Maybe they were trying to testosterize the title (seeing that the main character is a woman), but they didn’t really need to do that because just Hanks’ presence in the film is enough for moviegoers, and there’s such a wonderful interplay of the masculine and feminine between them, as well as flashbacks to the authoress’ relationship with her own father.

Notwithstanding the title, Saving Mr. Banks does succeed as a movie, which must have been a very difficult feat to achieve. Think about it. A prickly, precise, practically perfect British authoress does not want to sell  — or sell-out — her “Mary Poppins” character to Walt Disney so he can turn her into a singing, dancing bit of fluff. And God forbid he should cast Dick Van Dyke or add animated, soft-shoe-ing penguins.  That’s the unexceptional premise. So how does the movie unfold?

At least half of the movie is set in authoress Mrs. Travers’ (a spot-on Emma Thompson who should have gotten an Oscar for “facial expressiveness”) childhood. The flashbacks are mainly about Mrs. Travers’ relationship with her beloved father, who, although he loved his little princess and was probably responsible for her fertile imagination, was an alcoholic and did not provide well for his family. An alternate title for this film could easily be: “When Life Disappoints.”

Many of the laughs come from Mrs. Travers’ utter disdain, no, horror at all things American. She shuns our optimism, vulgarity, juvenility, food, and even our sunshine. But she is in a predicament where she desperately needs the money that selling the Mary Poppins character to Disney would bring her. However, Mary Poppins is “family” to her, so she postpones signing over the rights while still micromanaging every step of the script.

Walt Disney and his collaborators know that she could pull the plug at any time, and that’s what makes it all so precarious every step of the way. She keeps recalling her father’s suspicious attitude toward money and his love of make-believe (what he called his “Celtic soul”).

Disney simply does not know how to please her, but as a fellow artist/creator, he knows how difficult it is to let go of a character. That’s exactly the way he feels about The Mouse. But that doesn’t mean he’s taking “no” for an answer. To arrive at “yes,” he must dig deep into Mrs. Travers’ soul and find out what makes her tick. Even here, it turns out, they are very much alike.

The soundtrack is supercalifragilisticexpialidocious by the stratospheric talent of Thomas Newman. It’s old-timey without being sappy, grand, contemporary and fresh.

There are some fleeting visual glances intimating that Mrs. Travers might practice Buddhism or be inspired by it. And her father’s “this life is just an illusion,” is a little disturbing. (Also, the bookends: “feeling it all happened before.”) If you’ve ever lived in L.A., you know that Buddhism is the religion of choice (for Westerners not raised in Buddhism). When Westerners graft Buddhism onto their existing Western mentality, it can quite literally mean that “we’re not real,” and “nothing really matters.”

A fellow student  (Christian turned Buddhist) in my UCLA screenwriting program incorporated an abortion into his screenplay. Because of his belief in reincarnation, he reasoned: “It doesn’t matter if we kill the baby’s body, because its soul will get to come back in another body.” Ideas have consequences. And don’t get me started on Kung Fu Panda or Eat, Pray, Love!

What IS the Christian view here? The world is not an illusion; it is passing away “as we know it” (1 Corinthians 7:31). There will be a “new heavens and a new earth” (Isaiah 65:17, Revelation 21:1), but it is very dependent—for  us–on what we do in reality here and now.

If you enjoy behind-the-scenes looks at Hollywood, how things came to be, or hashing out stories, this is your film. It’s great to watch the writing/songwriting team trying to find the heart of the story. This is Disney Films telling a story about a Disney film story. As I watched, I thought: I’d love to see Walt Disney’s own story.