Trending Now
You are at:Home»Featured»Sayles’ Amigo: Friend or Foe?
By Susan Soesbe on October 8, 2011 Featured, On TV and Movies 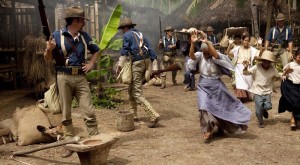 Imagine for a minute you are the mayor of a small town.  Your country, which has been occupied by a foreign power for many years, has been liberated by a second foreign power. But, your liberators have decided to stay. You have traded one occupier for another. The foreign government demands your allegiance and cooperation in fighting your country’s rebels. The rebels demand your allegiance and assistance in overthrowing the occupiers. Each group threatens your family and the town with suffering and death if they fail to cooperate. What will you do?

This is the moral dilemma faced by village head man Rafael Dacanay (the renowned Filipino actor Joel Torre) in John Sayles’ new film Amigo. Rafael, whose only desire all his life is simply to be “head man” of his baryo in the Philippines, like his father and grandfather before him, is in an impossible situation right from the beginning of the movie.  It is 1900, in the midst of the little-known Filipino-American War.  American soldiers are holding his village of San Isidro and pressuring him to help capture Filipino guerillas, while the guerillas consider anyone who cooperates with the Americans to be a traitor.  Rafael’s brother Simon (Ronnie Lazaro) is also a sort of “head man:” he is the leader of the local rebel band.  Rafael’s son Joaquinito is also a rebel.

Making the situation still more difficult, San Isidro’s Spanish priest, Padre Hidalgo (portrayed with chilling menace by Yul Vazquez) regards the natives patronizingly as liars and “wonderful mimics.” When Hidalgo is pressed into service as a translator, he craftily twists Rafael’s responses to the American Lt. Compton (the likeable Garret Dillahunt). When he is not serving as an unfaithful translator, the padre is chiding the villagers for incorrect doctrine or merely insulting them.

Throughout, Rafael and his devoted wife Corazon (film and television veteran Rio Locsin) navigate the twists and turns of fate with fortitude.  While Corazon holds to her Catholic faith, telling her husband, “God will guide us through this time,” he responds, “God is busy somewhere else.”  Rafael is the secular everyman who tolerates religion but knows there is no place for faith in the real world.  When Corazon credits God with helping a man in the village to stop drinking and beating his wife, Rafael tells her that the reason the man no longer does these things is because he, the head man, told the village vintner not to sell him any more palm wine.

Neither God nor religion fare well in this movie.  Religion is seen merely as a civilizing influence.  “If he can keep these people on a leash,” declares Lt. Compton of Padre Hidalgo, “he is welcome to their souls.”

Visually, Amigo is quite pleasing.  It has the expansive, incandescent feel of a Thomas Coles landscape and is strangely beautiful.  While the film cost only $1.5 million to make, it has a lush look, perhaps due in part to the fact that it was shot on location in the Philippines, using Filipino cast and crew.  Adding to the realism, the actors all speak in authentic languages with subtitles.  This seems more respectful of the individual characters and the ethnic groups they are meant to represent: the Filipinos speak Tagalog, the American soldiers speak English in various dialects, and the Chinese workers joke together in Mandarin.

Remarkably, Sayles, who wrote, directed and edited Amigo, shows restraint in declining to portray excessive violence. The film could legitimately have included buckets of blood and gore. Instead, the camera turns away and shows the faces of onlookers, or the aftereffects on the victims. The result is less shocking but no less thought-provoking. Western viewers are likely to relate to the American troops, so their cruelty to the villagers is all the more disturbing. This film is meant to disturb. Sayles says, “[U] sually, when America wins a war we celebrate it with lots of media, with lots of movies and I think there was a little bit of shame on the part of America, even at the time, but certainly in retrospect. There’s nothing very glorious about this war.” Sayles conceived the idea for Amigo as he was researching and writing  A Place in the Sun, a 955-page epic criticizing American interventionism abroad and racism at home during the late 19th and early 20th centuries. The film would be right at home in a course based on Howard Zinn’s A People’s History of the United States.

As a homeschooling mother, I have been looking for historically accurate films to use as a supplement to the history curriculum.  This movie once again caused me to question the very idea of historical accuracy in films.  Can movies “tell the truth,” not only in terms of details, but in terms of the spirit of the times?  For example, is Sayles saying that all, or most, Spanish priests in the Philippines at this time period were deceptive and arrogant?  Or is Padre Hidalgo a bad apple?  Are the messages meant to be universal or specific?  Is Rafael, the noble humanist who does his best to humbly serve his people in an impossible situation, an archetype or merely one individual?  Sayles writes, “Amigo deals with one of the most common but least examined aspects of human experience — the story of people caught in between.”  Perhaps the truth he would show us is that when groups or individuals war, there is always collateral damage, and not all of it is in the material realm.

Sayles observes, “Going to church on Sunday, the stories I’d hear — St. Peter in the garden — were all about people facing a tough moral decision. …That’s where my movies always start.” In Rafael’s baryo in 1900 — no less than in 2011 — knowing and doing the right thing is a daily challenge. In Amigo, the viewer’s sympathy is with the protagonist whose sole desire is not merely for himself or his own family, but for the good of his people. While religion and God do not come off well in Sayles’ film, Rafael’s sacrifice for the benefit of others is the shadow that the cross of Christ casts over it.