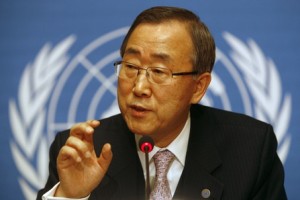 The Secretary General’s report “One Humanity: Shared Responsibility,” asks governments to include abortion and LGBT rights in their efforts to tackle the humanitarian objectives of the Sustainable Development Goals, a massive new 15-year UN development plan adopted by the General Assembly last year.

The report, released last week as a basis for discussions between governments at the World Humanitarian Forum in Istanbul this May, will cause consternation among UN member states because abortion and LGBT rights were expressly rejected in last year’s intensive negotiations of the goals.

Ban Ki-moon, who is now in his final year as Secretary General, begins the report without the customary obsequiousness that UN insiders are accustomed to. Instead he signals the personal importance of his project to centralize and coordinate global humanitarian efforts.

“As a boy I grew up in war. I was six years old when I was forced to flee my home and village in Korea with only what I could carry in my arms.” He goes on to retell how he was helped and inspired by a “young United Nations.”

In the report, alongside well established humanitarian responses, he urges that “priority” be given to “providing women and adolescents with comprehensive sexual and reproductive health services without discrimination,” a phrase understood by Ban Ki-moon’s staff and some UN member states to include abortion.

He also says countries have a “core” obligation to prohibit discrimination on the basis of “sexual identity,” a term never included in UN resolutions. UN member states blocked any reference to sexual orientation and gender identity during the negotiations on the goals last year, and rejected language that might be interpreted as including LGBT rights.

The Secretary General has been at the forefront of including abortion in humanitarian efforts, and has gone as far as claiming that providing abortion is an obligation under humanitarian law and the laws of war. In doing so, he is pushing the boundaries of what UN member states consider acceptable.

Reproductive health in the new UN goals refers back to a landmark 1994 UN agreement on population and development that expressly rejected any right to abortion under any circumstance and only permits abortion in UN programming where it is legal.

Moreover, legal experts have rejected the claim that abortion is a right under humanitarian law, including the Obama administration and the European Commission.

The Istanbul process may give Ban Ki-moon, who is looking to establish his legacy, a way to obtain tacit consent for his approach to the Sustainable Development Goals in a setting where nations that resist abortion and LGBT rights will be at a disadvantage.

Whereas the new UN goals were painstakingly negotiated by governments over three years, the May humanitarian summit was called by Ban Ki-moon and is controlled entirely by his staff, in particular the Office of the Coordinator for Humanitarian Assistance (OCHA), which prepared the report, and the World Humanitarian Summit Secretariat.