Trending Now
You are at:Home»Featured»Separated At Birth: The Identical Explores Identity, Conflict, Mission
By Kathy Schiffer on September 25, 2014 Featured, On TV and Movies 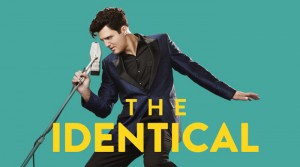 First, there’s the great music: The Identical, which has been showing in theaters across America, is replete with rock-and-roll music that is eerily reminiscent of the great Elvis Presley.  In fact, the legendary rock star Drexel Helmsley, one of the twin protagonists played by Blake Rayne, is a dead ringer for the ’50s icon; and if you’re not careful, you’ll slip into believing that it’s Elvis’s life you’re peering into on the big screen. Rayne himself, an indie recording artist and former web designer, found his way to Hollywood after winning an Elvis impersonator contest.

But the story, which is set to the toe-stomping, ear-pleasing music is just as compelling as the beat. The Identical is a story of love, faith, adoption, personal identity, family conflict and reconciliation.

During the Great Depression, the wife of a struggling businessman gives birth to identical twin boys, but the couple decides they cannot afford to raise two children, and they offer one of them to a country pastor and his wife who yearn to have children of their own.

The two boys grow up in very different circumstances:  Drexel Helmsley becomes a legendary rock star, performing in sold-out venues across the country. His win brother, Ryan Wade, grows up the son of a controlling father who dreams that his son will follow in his footsteps into the ministry.

But the great musical talent that spurred Drexel to fame has also touched Ryan. Despite his father’s wishes, Ryan dreams of a career writing music and singing. Ryan’s father, played by Ray Liotta, must pass through rage to acceptance, ultimately understanding that one can serve God in ministry, but also in music–and that the choice belongs not to him, but to his gifted son.  Ryan’s mother (Ashley Judd) is a peacemaker.

The Identical, with its high-energy musical performances, is a feel-good film; it’s also a morality play that’s great for families.  It’ll prompt some great discussions about what’s important in life, about how families can work through the great tragedies and misunderstandings, and how love remains.

This article first appeared on the Catholic Portal at Patheos. It is reprinted by permission.