Trending Now
You are at:Home»Featured»Separation of Church and State: Clarifying What Jefferson Meant
By Theodore Kobernick on August 20, 2011 Featured, Law & Justice 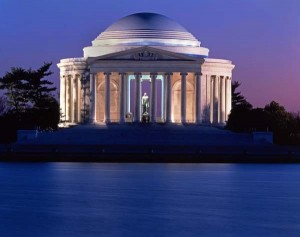 We Christians – all of us, Catholics, Protestants, and Orthodox – need an effective rebuttal to the harmful anti-church insistence that Thomas Jefferson, writing in his capacity of President, held that the Constitution forbade any religious expression in any public place.

We have often argued correctly that when Jefferson said “church” he meant either a specific religion or a specific branch of some religion; that he quoted the Constitution as saying that Congress may not establish a state religion; and that Congress may not make any law prohibiting the free exercise of religion in the United States; so we need not delve into that right now.

In Jefferson’s writing, the phrase, “wall of separation between church and State,” is found only in his reply of January 1, 1802, to the Danbury Connecticut Baptist Association.  Let Christians be aware of Jefferson’s final sentence of this letter. “I reciprocate your kind prayers for the protection and blessing of the common Father and Creator of man, and tender you for yourselves and your religious association, assurances of my high respect and esteem.”

The salient point here is that Jefferson, in reciprocating the prayers of the Danbury Baptist Association, was stating that he himself, as President, was engaging in prayer to “the common Father and Creator of man.” Now anyone who maintains that Jefferson’s “wall of separation” is the word of a sitting President, one of the Founding Fathers, has NO grounds to deny that Jefferson’s announcement that he is praying is equally presidential; it is equally the word of a Founding Father. And it must carry as much weight as the “wall” statement: both the “wall” and the assertion of presidential prayer are in the same letter! So clearly, Jefferson did not mean that the “wall of separation” precluded the sitting president’s published announcement that he is praying – like the Baptists – to the Father and Creator of humanity.

Probably, most persons who invoke the “wall of separation” to justify pushing religion out of public life, are merely parroting what they have heard and read in the mainstream media. My suggestion is that whenever we debate such a person, we start out with the argument cited above. Only after making this point clear should we explain what is meant by an “establishment of religion.”  Proceeding with the Danbury letter in context, we can then show the many instances of non-sectarian religious expressions employed in our government – such things as these:

For persons who knowingly twist Jefferson’s meaning to atheistic and irreligious purposes, let us pray that God will move them to conviction and repentance.