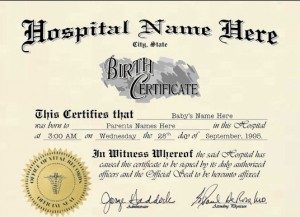 Recently in my state of California, Governor Jerry Brown signed a bill that, beginning in 2016, will alter birth certificates in a dramatic way.

Gomez said, “I authored this bill to say that it’s okay to have two mothers or fathers. I believe that parents do see themselves as a mother or a father and that they want to express that on their child’s birth certificate. We should give people the flexibility to accurately reflect their relationship with their child.”

A birth certificate is, indeed, a vital record, in the same category as marriage and death certificates. Such documents serve as a means of properly and accurately documenting important events that happen in a society. Who was born? Who married whom? Who gave birth? Who died?

The birth certificate legally documents who a child’s parents are. That is, who the birth mother and birth father are. It is a record of who is genetically related to a child. It is not intended to be a means by which adults decide what they want to be called. Rather, it answers the question, who can this child’s beginning be traced to?

Contrast this bill to what took place in New Jersey last year. The Star-Ledger reported on May 27, 2014: “After 34 years of publicly sharing their deepest feelings and most painful experiences, adoption activists celebrated today as Gov. Chris Christie signed a bill that will enable them to obtain their original birth records, beginning in 2017.”

Why do adoptees want their original birth records? Because these records hold vital information regarding who their birth parents are. They are not a record of who the adults decided would be mother, father, or “parent.”

Those born via anonymous egg or sperm donation share this same desire. They want to know who they came from, who they are biologically related to, who they look like. They do not appreciate the secrets—and oftentimes outright lies—that surround their origins.

One of my favorites lines in Anonymous Father’s Day is when Barry, describing his experience as a donor-conceived person, says, “Secrets are like landmines you know. They can go off at any time, but until they go off you’re sort of treading around them.”

Assemblyman Gomez thinks his new law is modern and progressive, necessary to keep up with the times. He says, “In the long term, this will change the way people view the family structure and view each other. In the future, it won’t be a debate; it will be something that is commonly accepted.”

If we’ve learned anything from the history of adoption, it’s that we can’t just wish away biological origins and simply declare new family structures without impact, particularly on children.

Assemblyman Gomez’s new law will create a new debate. This debate will be lead predominately by those created from anonymous gametes who, no matter what the adults decide, will want to know the truth of who their mother and father are.

They should have access to know the truth. A birth certificate should record the name of the biological mother and biological father of the child, not the wishes of adults.