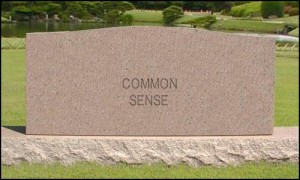 Common sense is not the exclusive domain of any particular group of people, but in our day and age it seems to be about as prehistoric as the Tyrannosaurus Rex—especially when it comes to sex.

What is common sense? Webster says it is “the ability to think and behave in a reasonable way and to make good decisions.” But what is “good”? Ah! That is the question—the pivotal problem that is so hard to answer in this era of moral relativism. Nonetheless, I will take a stab at it.

For any person who wants to live a life pleasing to God, there are some things that are so fundamental that they are hard to ignore. For example, what separates us from the animal kingdom is that, as human beings, we have a soul, a conscience, and the innate ability to instinctively know the difference between right and wrong. It also helps if the man or woman at least agrees that there is, as Alcoholics Anonymous defines it, a “higher power.” When such people, who are attempting be good, stumble, they know they can try again.

Clearly, apart from faith itself, there are some actions that are healthy for the mind and body and others that are not. Sure, the cultural icons of the day would have us think that anything goes and nothing is off limits, but let’s examine, for example, what one feminist has to say about birth control pills.

English feminist writer Holly Grigg-Spall has written a book entitled Sweetening the Pill: Or How We Got Hooked on Hormonal Birth Control, “a passionate attack on hormonal contraceptives.” Its promotional literature says:

Contrary to cultural myth, the birth-control pill impacts on every organ and function of the body, and yet most women do not even think of it as a drug. Depression, anxiety, paranoia, rage, panic attacks—just a few of the effects of the pill on half of the over 80 percent of women who pop these tablets during their lifetimes. When the pill was released, it was thought that women would not submit to taking a medication each day when they were not sick. Now the pill is making women sick.

However, there are a growing number of women looking for non-hormonal alternatives for preventing pregnancy. In a bid to spark the backlash against hormonal contraceptives, this book asks: Why can’t we criticize the pill?

Feminists who disagree vehemently with Grigg-Spall have been quick to verbally discredit her or, at the very least, create doubt about her credentials and her research. But those of us who have known for years that the pill is bad medicine are not shocked by the attack. Proponents of smutty behavior will go to any extreme to defend their position, short of factually refuting what writers like Grigg-Spall are putting forth.

The Catholic Church, as well as many Christian leaders, have realized the moral and physical dangers of these practices for years. The birth control pill is bad for women and deadly for babies prior to implantation in their mother’s womb. That is not an opinion, it is a scientifically proven fact. But it is also something that proponents have to deny. They have lost their ability to differentiate between good and bad, right and wrong.

But the pill is only one example.

In today’s moral free-fall atmosphere, this headline appears to be nothing more than just another story: “Woman Will Attempt to Carry a Child in Her Mother’s Transplanted Womb in Groundbreaking Medical Procedure.” Is a “donor womb” the next step in the march toward eliminating natural procreation altogether? Lest someone thinks this is not a serious question, how about this headline: “Is Same-Sex Parenting Good for the Gay Community?”

Ask yourself: How do two men or two women have a child? The answer of course is surrogacy—a by-product of the reproductive technology industry. Clearly the sexual satisfaction regime, composed of organizations and people that do not give one fig if their fellow human beings play Russian Roulette with their very lives, have co-opted common sense for the sake of instant gratification.

Sadly, the only real rule dominating the agenda for these folks is that man must be totally independent of God and His laws.

The price for accepting this trend in daily life is extremely high—and the eternal consequences sizzling, to say the least.

It’s high time for such folks to take a reality check, confront the facts, and make a sincere effort to get their common sense back in focus.