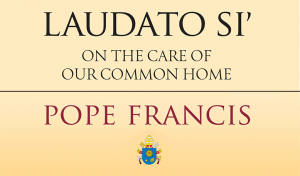 With the release of the Pope’s encyclical “Laudato si‘” there has been a lot of debate over the content of the Holy Father’s remarks.  Unlike some commentators, I do not think that should be shut down.  Those who question global warming (something I do believe in) are not like those dissenting from Humanae Vitae.  Not even close.

The Holy Father has stated from the beginning of this pontificate that he wants a frank and open discussion about issues, and frank discussion will at times involve disagreement with some of his conclusions.  Trying to determine the amount of culpability man has in a warming earth is different from whether or not one should use contraception.  Pope Francis has already gone on record against the idea that ” the papal magisterium should be expected to offer a definitive or complete word on every question which affects the Church and the world.”  (Evangelii Gaudium, 17)

Yet if the Pope does not wish to offer a definitive or complete answer, is his voice still relevant?  There has been some commentary (including unfortunate remarks by Catholics like Rick Santorum who should know better) that the Pope shouldn’t involve himself with these questions at all.  Instead, the Pope should stick to “religious” issues only.  So while I am not interested in debating the validity of various statements in the Pope’s encyclical, it is worth considering whether even attempting such statements are a good idea to begin with.

As a traditionalist, I find that this topic needs to be explained further evidence of the crisis we are in today.  While it is true that one is a Catholic based on two things (communion with Rome and adherence to the Catholic and Apostolic Faith), our Catholicism can never be limited to just those two things.  When Pope Leo XIII sought to address the plight of workers in the Industrial Era, he considered whether or not the Catholic Church should speak on something that wasn’t dogmatic:

Neither must it be supposed that the solicitude of the Church is so preoccupied with the spiritual concerns of her children as to neglect their temporal and earthly interests. Her desire is that the poor, for example, should rise above poverty and wretchedness, and better their condition in life; and for this she makes a strong endeavor. By the fact that she calls men to virtue and forms them to its practice she promotes this in no slight degree.  (Rerum Novarum 28)

While this was mainly a question of economics, Leo’s point is sound.  For the Church, one cannot talk about spiritual needs separate from the temporal needs.  While these matters don’t ascend to the status of, say, the Hypostatic Union, they are essential to actually living out the faith for most Catholics.  While the business owner might have little need to reflect daily upon the Hypostatic Union (though you should!), he has to wonder daily if he is paying his workers their fair share.  Since defrauding a worker his wages is a sin that cries to heaven for vengance, the businessman needs sound Christian guidance on what a just wage is.

The same could be said for an issue like our relationship to the environment.  While the amount of responsibility we have for carbon emissions might not be of the same worth as the doctrine of the Immaculate Conception, humans are called to be good stewards of what we have been given on Earth.  Since that command is divine in origin, it only figures that the Church would have something to say about this.

Another reason the Church has something to say about this is that, for the Catholic, these “non-religious” means are often how we live out our religious vocation.  St. Pius X stated that:

No matter what the Christian does, even in the realm of temporal goods, he cannot ignore the supernatural good. Rather, according to the dictates of Christian philosophy, he must order all things to the ultimate end, namely, the Highest Good. All his actions, insofar as they are morally either good or bad (that is to say, whether they agree or disagree with the natural and divine law), are subject to the judgment and judicial office of the Church.  (St. Pius X, Singulari Quadam, 3)

It is from these principles that Catholic Social teaching takes its root.  To the Catholic, there is never something truly “secular.”  Since the Gospel impacts every aspect of our lives, these “secular” things are really just opportunities to live out the Gospel.

As one can see, these principles are not new.  They are not some innovation particular to modern times.  They have been explicitly treated on by the Popes for over a century, and these teachings have their roots in a far more ancient patrimony.  If this line of thinking has been pit and parcel of Catholicism for so long, why is there such a resistance to it, even among otherwise orthodox Catholics?

It is here we reach a harsh reality that, among Catholic circles in America, dare not speak its name.  As we have attempted to integrate ourselves in American society, we have forgotten a lot of these truths.  Since we live in the modern liberal state (even if that state be “conservative”), a lot of the old anti-liberal writings of the pontificates of Bl. Pius IX, Leo XIII and St. Pius X can be, well, embarrassing.  Even when we have ascribed to the dogmas of the faith, we have always had that individualism in our blood, that blood that refuses to be dictated to by the outsider.  While today we often feel this is okay, St. Pius X condemned something which sounds awfully similar:

Since the deposit of Faith contains only revealed truths, the Church has no right to pass judgment on the assertions of the human sciences

This is not to say that one cannot be an American patriot and a good Catholic.  Patriotism is a virtue, and Catholics can, should, and must not only take pride in their nation, but pridefully work to better her.  While we must have that patriotism, we must also be willing to consider correction, especially on spiritual and moral matters, from the dictates of the Church.  One is free to question the rate at which global warming is or isn’t happening.  The Pope might even be wrong in his assessment of certain proposals to deal with these issues.  Yet when he’s offering a critique that is just as rooted within morality and spirituality as it is science, we must take care not to be like the modernists who held that the Church had no right to speak on these issues.