Trending Now
You are at:Home»Featured»Sisters of Mary Compete on The American Bible Challenge
By Patti Maguire Armstrong on March 20, 2013 Featured, On Media, Vocations 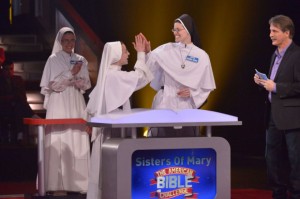 Television is discovering the Bible makes for good viewing.  In addition to The History Channel’s airing an epic 5-part Bible series, the second season of The American Bible Challenge game show begins this Thursday, March 21 at 9 pm EST on GNS.  Hosted by Jeff Foxworthy, this fast-paced, one-hour game show pits Bible loving groups representing a variety of diverse and entertaining Christians against one another.

Last year, I read several articles wondering if the show would tend to be Protestant and overlook a Catholic point of view.  Such concerns should be relieved with the first episode of the new season since one of the teams is made up of three Dominican Sisters of Mary, Mother of the Eucharist: Sister Peter Joseph (novice); Sister Maria Suso (Professed Sister); Sister Evangeline (novice). Based in Ann Arbor, MI, they take vows of chastity, poverty, and obedience, and have a contemplative emphasis on Eucharistic adoration and Marian devotion. The team competed against two other teams: Team Anointed Ink, helping rehabilitate former gang members by covering gang tattoos with uplifting substitutes (and praying with them before they begin), and Team Preachin’ Divas, girlfriends preaching and teaching the word of God in their East Oakland, CA community.  Any of the sisters’ winnings will go toward the retirement fund of their older sisters.

I won’t give away who wins the ultimate challenge but I will share that aside from the competition, the sisters hit the jackpot, winning hearts both inside and outside of the television studio. After all, it is not often sisters in full habit are spotted as tourists walking wide-eyed along the streets of Hollywood and Los Angeles.

In their pre-program interview, clips are shown at prayer, at work and at play, revealing love and camaraderie even during their favorite sports. Sister Mary Suso explained to the audience, “Christianity is all about giving your whole self to whatever God is calling you to do, and sometimes God is calling you to play volley ball or go on the American Bible Challenge.”

During a phone interview Suso explained that their community is dedicated to the New Evangelization, although appearing on a TV game show was something very unique for them. “It’s not something that we would normally seek out, but Mother discerned it would be a good thing for us to try since we are willing to engage in anything to share our faith.”

It was a spiritual adventure as much as an exciting experience for the sisters. Wearing their habits around Hollywood and Los Angeles, many people were fascinated and some even came up to ask questions. “There was so much hunger for the witness to the consecrated life,” said Suso. “It was an opportunity to be an example of joyful, vibrant, consecrated life. We had many interactions with people, including many with fallen away Catholics.” At one point, two men–one dressed as Spider Man and the other as his rival, Venom—walked up to the sisters. “We stepped back, unsure of them,” said Suso, “but the man dressed as Spider Man took Sr. Angelina’s hand and made the sign of the cross, then left.”

For the sisters, competing on the game show was a matter of obedience to their Mother Superior. “Mother asked the community for volunteers,” explained Suso. “We applied, had an interview, and filled out paperwork with multiple choice questions about Biblical knowledge,” she said. “We went out of obedience but we were excited to represent the community. We really enjoyed interacting with the other teams and besides the evangelization part, playing the game was really fun.”

As a matter of fact, the sisters had a” blast.”  In addition to having a chance before a national audience to show Catholics really do love the Bible, the sisters found they were witnessing and evangelizing everywhere they went. “We were in the airport and a man came up to us and commented that we looked really happy,” said Suso We were just talking to one another but it was a witness of our community life and helped to show people what it means to be a Catholic.”