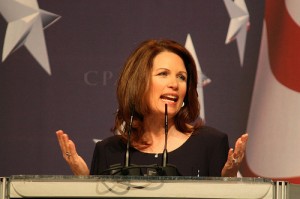 Move over, Sarah Palin. Michele Bachmann is the new bogeyman — er, woman — of the left.

She opposes pornography and abortion. She’s stingy with the taxpayer money entrusted to her. There are even rumors that she gets headaches — really, really bad headaches.

As for her family values, well, yes, Bachmann and her husband raised five children of their own and nearly two dozen foster children. But crack investigative journalists have uncovered evidence that some of those 23 foster kids only lived with her family for a short time. They were, in other words, foster children rather than adoptees. So that really should not count in her favor, should it?

And if that’s not enough to dissuade Republican primary voters from warming to this Minnesota congresswoman and Tea Party favorite now eying the White House, consider this: Bachmann once belonged to a conservative Lutheran church that expressed clear disdain for the papacy.

That’s right: Bachmann, a Protestant, belonged to a church that rejected the authority of the pope. Shocking.

Bachmann, of course, has not attended that particular church in two years and publicly rejected Martin Luther’s description of the pope as the “Anti-Christ.”

“It’s abhorrent, it’s religious bigotry,” Bachmann said, when confronted with that statement at a 2006 debate. “I love Catholics.”

To the unseasoned observer, her denial of animus toward Catholics might ring true. Bachmann, after all, stands firmly on the side of the Catholic Church on a whole host of issues that the church has defined as non-negotiable, from her rejection of embryo-destructive stem cell research to her defense of traditional marriage.

But left-leaning pundits know better. They can see right through Bachmann’s charade of supporting Catholic positions and cultivating Catholic backers and detect the fire-breathing anti-Catholic bigot beneath.

Their sudden concern for the problem of anti-Catholicism is surprising, given that some of the same folks now flogging Bachmann for a 500-year-old anti-papal phrase buried in her former denomination’s doctrinal statements frequently tell Catholic Church leaders to shut up and butt out of public policy debates — unless, of course, those debates concern immigration or the death penalty. They mock the pope and Catholic teachings, blast lay Catholics who defend those teachings in the political arena and call for the revocation of the church’s tax-exempt status when they hear priests defending Catholic teachings too pointedly from the pulpit around Election Day.

Many of these secular critics of the Catholic Church do not blink an eye when Bill Maher describes the pope as a “Nazi” and the Catholic Church as “a child-abusing religious cult.” Nor do they speak up when government officials force Catholic Charities out of the adoption business for refusing to place children with same-sex couples because doing so would contradict Catholic doctrine. Apparently, they consider anti-Catholicism acceptable after all, as long as it comes from the left end of the political spectrum.

Their cynical attempt to smear Bachmann with the anti-Catholic label does not negate the role that religious concerns play in candidate evaluations. Asking questions about the beliefs of presidential contenders is perfectly appropriate during this election cycle, just as it was in 2008, when America learned that Barack Obama had spent decades in a church led by the Rev. Jeremiah Wright, of “God damn America” fame. Back then, many in the establishment media dismissed Wright’s inflammatory rhetoric as irrelevant to the presidential candidate who had sat listening to it during his formative years.

They were wrong. It matters how a politician views God, the world and others who do not share his beliefs. And given the history of anti-Catholicism in America, Catholics are right to take an interest in the way political leaders view their church and its role in society.

Yet they also should note how politicians express those views in action. Most Catholics who adhere to their church’s moral teachings would happily take a Protestant who supports Catholic values over a cafeteria Catholic who opposes his own church at every crucial turn. The question they ask when evaluating the religious character of a candidate is not simply “what do you believe” but “how do your beliefs shape the way you act in the public square?”

That’s a good question for Americans of all religious stripes to ask of 2012 presidential contenders, including our sitting president. Don’t just tell us what you believe, we should say; show us how the beliefs and principles you profess have impacted the decisions you made as a leader. In other words, show us how you walk the talk.