Trending Now
You are at:Home»Featured»Soft Tissue In T-Rex Bones: Don’t Pick a Side
By Stacy Trasancos on February 6, 2014 Featured, Science 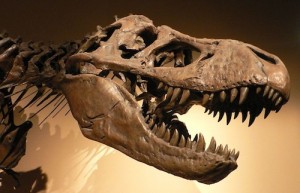 In 2005 Science journal reported the discovery of soft tissue in the bones of a Tyrannosaurus rex, and how it got there has been debated ever since. Dr. Mary H. Schweitzer, whose research team found the soft tissue, maintains that it was preserved by an exceptional process over the 65 million years since T-rexes became extinct. The process is a mystery, though, because soft tissue decomposes in much shorter times. Critics say the more reasonable explanation is that T-rexes aren’t that old. Those researchers C-14 dated the soft tissue to about 20-30 thousand years.

This discovery has tremendous implications for the scientific understanding about the age of the earth, which is why “young earth creationists” and evolutionists debate the meaning of the soft tissue discovery. The evolutionists accuse the creationists of trying to use science to prove a literal interpretation of Genesis. The creationists suspect evolutionists are suppressing data that reveals a literal interpretation is correct. Or so it seems. It’s difficult for a newcomer to figure out what to believe, especially if you are a faithful Catholic trying to understand the science.

A reader emailed me about this question, and the approach I take is to refer to dogma to define legitimate boundaries of intellectual freedom. Start with this fundamental question: Does either conclusion contradict dogma? A solid knowledge of the truths revealed by God, the dogma the Catholic faith requires us to believe, serves as a safeguard against false conclusions, such as atheistic materialism.

If dinosaurs lived tens of thousands, instead of tens of millions, of years ago then radiometric dating methods about the age of the earth need to be reconsidered. If the earth is young, then, yes, it is even harder for natural selection and random mutation to scientifically explain the diversity of life. But young or old, neither conclusion could possibly contradict that God created the universe to change as He willed it. Therefore, a Christian can safely explore this question with an open scientific mind.

But explore with a curious skepticism. First, don’t be timid about reading scientific papers and judging the merits of the research for yourself. Big terminology aside, scientific writing is concise and logical. Second, reject the impulse to settle the question and pick a side. Both sides will argue their cases, but picking a side prematurely with incomplete knowledge hinders your intellectual pursuit. Finally, when reason and observation provide no clear solution or decisive evidence, leave the matter open to further inquiry. I think it’s admirable to say, “I don’t know, I’m still forming an opinion.” On this issue and on evolutionary theory in general, that’s my answer.