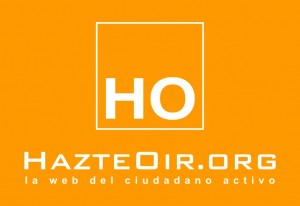 Political systems and popular representation are changing. Movements like the Spanish 15-M, or the American Tea Party are spontaneous movements which indicate that democracy — while a good system of government — is currently in crisis. What this means is that there are some citizens whose voices are not being heard — so they have created other ways of participating in the political process.

This very thing is occurring right now in Spain. The group Hazte Oir (literally: “Have Your Say”) is a group of citizens who, for a decade now, have been looking for effective ways to express their disagreement with the state of things in Spain. The thing about Hazte Oir is that they represent a Spanish majority — a majority that has not been sufficiently taken into account. It was Hazte Oir that stood strong against the socialist and anti-religious government of former Spanish prime minister José Luis Rodríguez Zapatero.

Now that a less aggressive party is in power, Hazte Oir is preparing for a new, long-term strategy. They, along with a few other Spanish groups, plan to continue to represent the majority of Spaniards — by fighting to defend basic human rights of life and family, including working to change laws on issues like abortion.

Last November Hazte Oir organized the “5th Congress of e-Citizens” in Madrid. At this gathering, Carlos Polo, Director of PRI’s Latin American Office, spoke about Hazte Oir’s new way of doing politics. In this talk, Polo drew a comparison between the battle Hazte Oir is currently fighting, and the battle fought long ago by British abolitionists at the end of the 18th century.

The comparison didn’t fall on deaf ears. With the change of government, Hazte Oir’s change of pace has involved a media-savvy campaign called “Abolition of Abortion”, which is already having extraordinary impact on Spanish politics. For instance, its first major success was to get the new vice president to make a statement, saying that the current abortion law will be changed. But this is obviously not enough, and Hazte Oir has promised to take further steps. The “Abolition of Abortion” campaign promises to forge ahead, and PRI in Europe has pledged to put in our bit to aid them.

So congratulations to Hazte Oir for an exciting new campaign! It is living proof that Spanish citizens can organize, as the British abolitionists of 200 years ago did in order to defend a basic human right that most people do not understand. Just as in that time, there were people who scoffed at the idea of the freedom of slaves; today many people do not recognize the importance of defending the rights of unborn children. Platforms of people like Hazte Oir can repeat the successes of these abolitionists, since we believe this civic fight is essential not only for children but for the future of society.