Trending Now
You are at:Home»Columnists»Spiritual Warfare and the Pope’s Resignation
By Louie Verrecchio on February 12, 2013 Columnists, Featured, Live in Christ 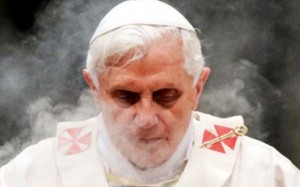 In making this stunning announcement before the College of Cardinals, the Holy Father cited “advanced age” and a lack of “strength of mind and body” as the factors that led him to conclude that he is incapable of “adequately fulfilling” the Petrine ministry.

At first blush, the Holy Father’s statement seems to say little more than, “I’m old and I’m tired,” and while I’ve no doubt that he is both, I do not for a moment believe that he is concerned only with matters purely physical.

So what exactly is moving Pope Benedict XVI to abdicate?

The answer is suggested in the book, Light of the World, wherein the Holy Father said that a pope “has a right and, under some circumstances, also an obligation to resign” if and when he “clearly realizes that he is no longer physically, psychologically, and spiritually capable of handling the duties of his office.”

In spite of the Holy Father’s reference to “strength of mind and body,” there’s no indication that he lacks either mental acuity or psychological health, and while he is clearly suffering the effects of old age, if the final years of his predecessor’s papacy demonstrated anything it’s that even severe physical weakness doesn’t render one “incapable” of filling the duties of the Office.

This leaves just one thing; the spiritual realities of serving the Church as pope.

The Holy Father’s statement refers to the Church in our day as being “shaken by questions of deep relevance for the life of faith.”

What are these questions if not those that are begged by the content of Vatican Council II?

In his now famous Christmas Address to the Roman Curia dated December 22, 2005, Pope Benedict set forth the agenda for his papacy; promoting a conciliar interpretation that is based upon a “hermeneutic of renewal in continuity with the one subject Church the Lord has given us.”

Two and half years later, the Holy Father issued Summorum Pontificum, his single boldest attempt to leverage the power of his exalted office to establish said continuity as it relates to the “source from which all of the Church’s power flows;” the sacred liturgy.

While the situation has improved in many places, it is largely unchanged in others.

As I write today from the Premier See of the United States, the Archdiocese of Baltimore boasts a grand total of two regularly scheduled “Extraordinary Form” Sunday Masses.

In 2009, the Holy Father made yet another bold move toward establishing continuity in a decree lifting the excommunications from the bishops of the Society of St. Pius X (SSPX).

Once again, the modernists, in a partnership of convenience with largely secular Jews, pilloried the pope with impunity.

In a letter to the world’s bishops, the Holy Father expressed sincere shock at the lack of fraternal charity on the part of those whom he naively assumed had reverence for his office and for himself.

“I was saddened by the fact that even Catholics who, after all, might have had a better knowledge of the situation, thought they had to attack me with open hostility,” Pope Benedict wrote.

Then, last year, even as all signs seemed to indicate that the Holy Father was prepared to take steps to canonically regularize the SSPX, the process came to an abrupt and unexpected halt.

While the extent to which the derailment can be attributed to the efforts of those aforementioned modernists who have opposed this pope at every turn is unknown, what did emerge from the process is the Holy See’s acknowledgement that there still exists a lack of clarity with regard to “individual expressions and formulations contained in the documents of Vatican Council II and later Magisterium.”

In other words, more than seven years after Pope Benedict’s seminal address of 2005, the guiding proposition of his papacy (namely, that “continuity” is necessarily present for the finding in all that the Council proposed) remains but an unproven hypothesis.

What’s more, every attempt on his part to rule in such way as to suggest that “what was sacred before the Council is sacred today,” has proven to guarantee that the forces of hell will be unleashed, not just from without, but from within the very walls of the Church.

So, when the Holy Father speaks of being “no longer suited to an adequate exercise of the Petrine ministry,” I would suggest that he is referring to the work of leveraging the Sovereign authority vested in Peter’s Successor, to meet out the firm discipline that is necessary to protect the faithful from those who openly resist the corrections that are needed to avert the present day crisis.

In short, the Holy Father knows from bitter experience how ready and able the enemy is, and he believes that his minions will remain powerful enough to succeed in undermining the good of the Church from within, at least until such time as his successor arrives on the scene, and so he is making room for this to happen sooner rather than later.

I think the Holy Father is suggesting that the Church desperately needs another Pope St. Pius X, and he has decided, rightly or wrongly, that he cannot be that man. That said, there is no guarantee whatsoever that he is to emerge from the next conclave. Yes, the Holy Ghost will be present to guide the proceedings, but even He can be trumped by the hubris of men should they so choose.

Mark my words: We will know what the immediate future holds for the Church based upon just one observation; namely, the liturgical mindset of Pope Benedict’s successor.

If the man who is chosen has a distaste for the Traditional Mass, then rest assured, regardless of any apparent orthodox bona fides the new pope may have, the modernists will succeed in making Catholic life difficult.

If, however, they elect a man who loves the Tridentine Rite, celebrates it often, and continues to do so as pope, know for a fact that while tribulation is most certainly coming, we are moving in the right direction.