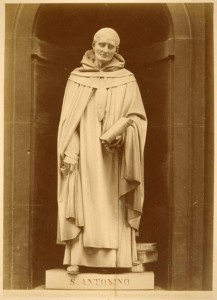 ANTONINUS, or Little Antony, as he was called from his small stature, was born at Florence in 1389. After a childhood of singular holiness, he begged to be admitted into the Dominican house at Fiesole; but the Superior, to test his sincerity and perseverance, told him he must first learn by heart the book of the Decretals, containing several hundred pages. This apparently impossible task was accomplished within twelve months; and Antoninus received the coveted habit in his sixteenth year.

While still very young, he filled several important posts of his Order, and was consulted on questions of difficulty by the most learned men of his day; being known, for his wonderful prudence, as “the Counsellor.” He wrote several works on theology and history, and sat as Papal Theologian at the Council of Florence.

In 1446 he was compelled to accept the archbishopric of that city; and in this dignity earned for himself the title of “the Father of the Poor,” for all he had was at their disposal. St. Antoninus never refused an alms which was asked in the name of God. When he had no money, he gave his clothes, shoes, or furniture. One day, being sent by the Florentines to the Pope, as he approached Rome a beggar came up to him almost naked, and asked him for an alms for Christ’s sake. Outdoing St. Martin, Antoninus gave him his whole cloak. When he entered the city, another was given him; by whom he knew not.

His household consisted of only six persons; his palace contained no plate or costly furniture, and was often nearly destitute of the necessaries of life. His one mule was frequently sold for the relief of the poor, when it would be bought back for him by some wealthy citizen. He died embracing the crucifix, May 2d, 1459, often repeating the words, “To serve God is to reign.”

Reflection.—”Alms-deeds,” says St. Augustine, “comprise every kind of service rendered to our neighbor who needs such assistance. He who supports a lame man bestows an alms on him with his feet; he who guides a blind man does him a charity with his eyes; he who carries an invalid or an old man upon his shoulders imparts to him an alms of his strength. Hence none are so poor but they may bestow an alms on the wealthiest man in the world.”