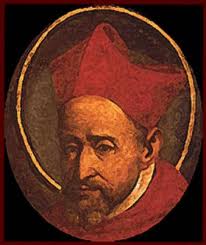 Thomas Cajetan was born in northern Italy, at Vicenza, in 1480, of pious and noble parents, who dedicated him to our blessed Lady. From childhood he was known as the Saint, and in later years as “the hunter of souls.”

A distinguished student, he left his native town to seek obscurity in Rome, but was there forced to accept office at the court of Julius II. On the death of that Pontiff he returned to Vicenza, and disgusted his relatives by joining the Confraternity of St. Jerome, whose members were drawn from the lowest classes; while he spent his fortune in building hospitals, and devoted himself to nursing the plague-stricken.

To renew the lives of the clergy, he instituted the first community of Regular Clerks, known as Theatines. They devoted themselves to preaching, the administration of the sacraments, and the careful performance of the Church’s rites and ceremonies. St. Cajetan was the first to introduce the Forty Hours’ Adoration of the Blessed Sacrament, as an antidote to the heresy of Calvin. He had a most tender love for our blessed Lady, and his piety was rewarded, for one Christmas eve she placed the Infant Jesus in his arms. When the Germans, under the Constable Bourbon, sacked Rome, St. Cajetan was barbarously scourged, to extort from him riches which he had long before securely stored in heaven.

When St. Cajetan was on his death-bed, resigned to the will of God, eager for pain to satisfy his love, and for death to attain to life, he beheld the Mother of God, radiant with splendor and surrounded by ministering seraphim. In profound veneration, he said, “Lady, bless me!” Mary replied, “Cajetan, receive the blessing of my Son, and know that I am here as a reward for the sincerity of your love, and to lead you to paradise.” She then exhorted him to patience in fighting an evil spirit who troubled him, and gave orders to the choirs of angels to escort his soul in triumph to heaven. Then, turning her countenance full of majesty and sweetness upon him, she said, “Cajetan, my Son calls thee. Let us go in peace.” Worn out with toil and sickness, he went to his reward in 1547.

Reflection.—Imitate St. Cajetan’s devotion to our blessed Lady, by invoking her aid before every work.