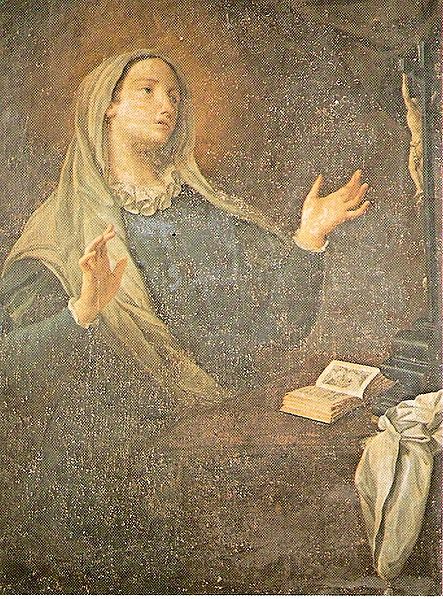 She was born in Genoa in 1447, the last of five children.  Rich, exceedingly beautiful, and of noble lineage, Catherine had as a child rejected the solicitations of the world, and begged her divine Master for some share in His sufferings. At sixteen years of age she found herself promised in marriage to a young nobleman of dissolute habits, who treated her with such harshness that, after five years, wearied out by his cruelty, she somewhat relaxed the strictness of her life and entered into the worldly society of Genoa.

At length, enlightened by divine grace as to the danger of her state, she resolutely broke with the world and gave herself up to a life of rigorous penance and prayer. The charity with which she devoted herself to the service of the hospitals, undertaking the vilest of offices with joy, induced her husband to amend his evil ways and he died penitent.

Her heroic fortitude was sustained by the constant thought of the Holy Souls, whose sufferings were revealed to her, and whose state she has described in a treatise full of heavenly wisdom. A long and grievous malady during the last years of her life only served to perfect her union with God, till, worn out in body and purified in soul, she breathed her last on September 14, 1510.

Reflection.—The constant thought of purgatory will help us not only to escape its dreadful pains, but also to avoid the least imperfection which hinders our approach to God.