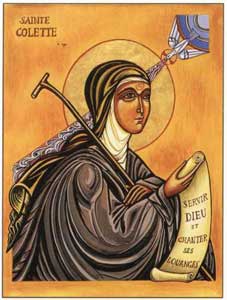 AFTER a holy childhood, Colette joined a society of devout women called the Beguines; but not finding their state sufficiently austere, she entered the Third Order of St. Francis, and lived in a hut near her parish church of Corbie in Picardy. Here she had passed four years of extraordinary penance when St. Francis, in a vision, bade her undertake the reform of her Order, then much relaxed.

Armed with due authority, she established her reform throughout a large part of Europe, and, in spite of the most violent opposition, founded seventeen convents of the strict observance. By the same wonderful prudence she assisted in healing the great schism which then afflicted the Church. The Fathers in council at Constance were in doubt how to deal with the three claimants to the tiara—John XXIII, Benedict XIII, and Gregory XII. At this crisis Colette, together with St. Vincent Ferrer, wrote to the Fathers to depose Benedict XIII, who alone refused his consent to a new election. This was done, and Martin V was elected, to the great good of the Church.

Colette equally assisted the Council of Basle by her advice and prayers; and when, later, God revealed to her the spirit ‘ of revolt that was rising, she warned the bishops and legates to retire from the council. St. Colette never ceased to pray for the Church, while the devils, in turn, never ceased to assault her. They swarmed round her as hideous insects, buzzing and stinging her tender skin. They brought into her cell the decaying corpses of public criminals, and assuming themselves monstrous forms struck her savage blows; or they would appear in the most seductive guise, and tempt her by many deceits to sin. St. Colette once complained to Our Lord that the demons prevented her from praying. “Cease, then,” said the devil to her, “your prayers to the great Master of the Church, and we will cease to torment you; for you torment us more by your prayers than we do you.”

Yet the virgin of Christ triumphed alike over their threats and their allurements, and said she would count that day the unhappiest of her life in which she suffered nothing for her God. She died March 6, 1447, in a transport of intercession for sinners and the Church.

Reflection.—One of the greatest tests of being a good Catholic is zeal for the Church and, devotion to Christ’s Vicar.