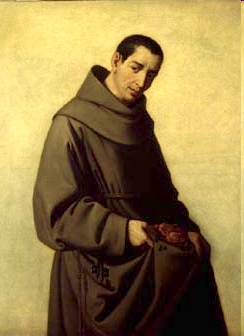 ST. DIDACUS was born in Spain, in the middle of the fifteenth century. In Spanish he is known as San Diego, from whom the California city takes its name.

He was remarkable from childhood for his love of solitude, and when a youth retired and led a hermit life, occupying himself with weaving mats, like the fathers of the desert. Aiming at still higher perfection, he entered the Order of St. Francis. His want of learning and his humility would not allow him to aspire to the priesthood, and he remained a lay-brother till his death, perfect in his close observance of the vows of poverty, chastity, and obedience, and mortifying his will and his senses in every way that he could contrive.

At one time he was sent by his superiors to the Canary Islands, whither he went joyfully, hoping to win the crown of martyrdom. Such, however, was not God’s will, and after making many conversions by his example and holy words, he was recalled to Spain. There, after a long and painful illness, he finished his days, embracing the cross, which he had so dearly loved through his life. He died with the words of the hymn “Dulce lignum” on his lips:

Reflection.—If God be in your heart, He will be also on your lips; for Christ has said, “From the abundance of the heart the mouth speaks.”