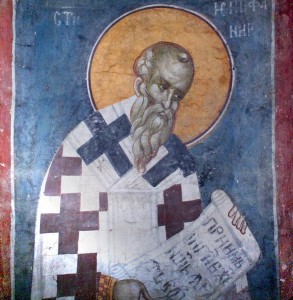 ST. EPIPHANIUS was born about the year 310, in Palestine. In his youth he began the study of the Holy Scriptures, embraced a monastic life, and went into Egypt to perfect himself in the exercises of that state, in the deserts of that country. He returned to Palestine about the year 333, and built a monastery near the place of his birth. His labors in the exercise of virtue seemed to some to surpass his strength; but his apology always was: “God gives not the kingdom of heaven but on condition that we labor; and all we can do bears no proportion to such a crown.” To his corporal austerities he added an indefatigable application to prayer and study. Most books then in vogue passed through his hands; and he improved himself very much in learning by his travels into many parts.

Although the skilful director of many others, St. Epiphanius took the great St. Hilarion as his master in a spiritual life, and enjoyed the happiness of his direction and intimate acquaintance from the year 333 to 356. The reputation of his virtue made St. Epiphanius known to distant countries, and about the year 367 he was chosen Bishop of Salamis in Cyprus. But he still wore the monastic habit, and continued to govern his monastery in Palestine, which he visited from time to time. He sometimes relaxed his austerities in favor of hospitality, preferring charity to abstinence. No one surpassed him in tenderness and charity to the poor. The veneration which all men had for his sanctity exempted him from the persecution of the Arian Emperor Valens.

In 376 he undertook a journey to Antioch in the hope of converting Vitalis, the Apollinarist bishop; and in 382 he accompanied St. Paulinus from that city to Rome, where they lodged at the house of St. Paula; our Saint in return entertained her afterward ten days in Cyprus in 385. The very name of an error in faith, or the shadow of danger of evil, affrighted him, and the Saint fell into some mistakes on certain occasions, which proceeded from zeal and simplicity. He was on his way back to Salamis, after a short absence, when he died in 403, having been bishop thirty-six years.

Reflection.—”In this is charity: not as though we had loved God, but because He hath first loved us.”