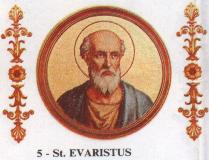 St. Evaristus succeeded St Clement in the See of Rome during the reign of Trajan and governed the Church for about eight years, as the fourth successor of St. Peter. The Liber Pontificalis says that he was the son of a Hellenic Jew of Bethlehem. In his first epistle addressed to the bishops of Africa, Evaristus decreed that seven deacons were to monitor a bishop’s preaching, to ensure that he did not lapse from the true teachings.

I am struck today by three things:

— that Evaristus was born in Bethlehem;

— that he was Jewish; and

— that he ordered seven deacons to monitor the preaching of bishops in order that orthodoxy be preserved.

I am struck by these three things because they show us very clearly the following:

(2) The leadership of the early Christian Church was predominantly, almost exclusively, Jewish; the first Popes were Jews; it was an essentially Jewish movement that over decades and centuries became multi-ethnic and multi-national; it was a movement which, in its own self-consciousness, believed itself to be not only “a” legitimate expression of Judaism, but truly “the” legitimate expression of Judaism;

(3) The concern for orthodoxy, for purity in doctrine as well as purity in life (for “orthodoxy” as well as “orthopraxis“) was not something that emerged much later, after Constantine.  Nor did the inspiration to guard orthodoxy emerge with Catholic kings, as in Spain, or with the concomitant desire to impose a type of political unity through doctrinal unity.  Determination to defend orthodoxy did not begin with the inquisition; nor after the Council of Trent, with the desire for doctrinal unity over against the defections from Catholic teaching preached by the Protestant Reformers.  No, the concern for orthodoxy was very early, it was, as it were, woven into the “genetic code” of Christianity from the earliest years.