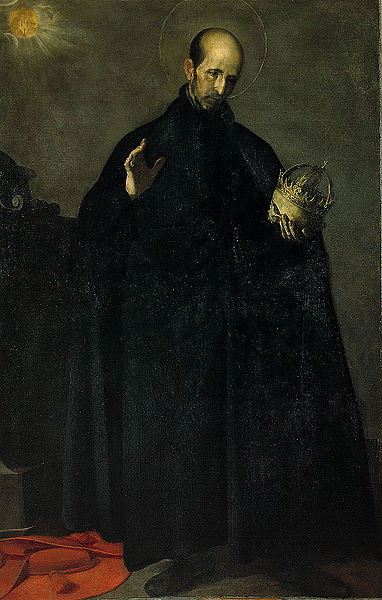 FRANCIS BORGIA, Duke of Gandia and Captain-General of Catalonia, was one of the handsomest, richest, and most honored nobles in Spain.  In 1539, there was laid upon him the sad duty of escorting the remains of his sovereign, Queen Isabella of Spain, to the royal burying-place at Granada. The coffin had to be opened for him that he might verify the body before it was placed in the tomb, and so foul a sight met his eyes that he vowed never again to serve a sovereign who could suffer so base a change.

It was some years before he could follow the call of his Lord; at length he entered the Society of Jesus to cut himself off from any chance of dignity or preferment. But his Order chose him to be its head. The Turks were threatening Christendom, and St. Pius V. sent his nephew to gather Christian princes into a league for its defence. The holy Pope chose Francis to accompany him, and, worn out though he was, the Saint obeyed at once. The fatigues of the embassy exhausted what little life was left. St. Francis died on his return to Rome, October 10, 1572.

Reflection.—St. Francis Borgia learnt the worthlessness of earthly greatness at the funeral of Queen Isabella. What do the deaths of friends teach us about ourselves?