Trending Now
You are at:Home»Learn & Live the Faith»Catechesis»St. Francis: Creation and “The Environment”
By Marcellino D'Ambrosio, Ph.D. on October 10, 2012 Catechesis, Columnists, Featured 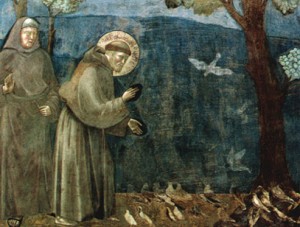 You often see a garden statue of him with a bird on his shoulder.  Yes, St. Francis of Assisi did have a special relationship with animals.  He preached to the birds, pacified a wolf, and put together an animal cast for what is widely regarded as the very first live nativity scene.

But he had no interest in “the environment.”  No feeling for it whatsoever.

Instead, he was in love with creation.  And that’s because he was in love with the Creator, who he regarded not as some cosmic force or distant, detached monarch, but as “Father.”  He so loved God his Father that he had great affection for anything related to God – the sacraments, the Church, its very imperfect ministers, broken down country chapels, and all of God’s marvelous works of art – human beings first and foremost, but also the animals and even the inanimate objects that adorn the heavens and the earth.

The fondness for and kinship St. Francis felt with “brother son and sister moon” was truly a gift.  But it is gift that we all receive when we receive the Holy Spirit since it is one of the seven gifts mentioned in Isaiah 11:2-3.  At least this is how St. Thomas Aquinas and many after him explained this beautiful, supernatural gift of piety.  The natural virtue of piety was extolled by the Greeks and Romans – a love of those who gave you life, first and foremost your parents and after them, your fatherland.  This entailed also a respect and affection for all that is connected with your parents and dear to them as well– your grandparents, uncles and aunts, and in the case of your country, its flag, its national anthem, its history and its heros.  The term for piety towards one’s country is “patriotism” which actually has at its root, the term “pater” or “father.”

St. Francis loved his home town of Assisi.  But his deeper patriotism was for the Kingdom of God.  His affection for the Kingdom included respect and reverence for all the King’s creatures and subjects, whether they be great or small.

Now, this does not mean that Francis saw all creatures as his equals, as some modern day animal rights advocates seem to.  One animal rights philosopher, Peter Singer, goes so far as to teach that adult whales and chimpanzees are actually superior to unborn, newly born, and retarded humans in both dignity and value.  He would save the whales allow both abortion and infanticide.

St. Francis would be appalled by such a concept.  Biblical person that he was, he understood that woman and man are God’s supreme masterpieces, made in His image and likeness, unlike the animals.  Human beings are given dominion over the rest of creation in Genesis 2 not to exploit however, but to cultivate, care for, and perfect.  God entrusts Adam and Eve not with “the environment,” but with “the Garden” – a place of beauty in which we are made to walk with God.

So St. Francis loves the birds, but also presses them into the service of the gospel.  He saves the wolf of Gubbio from the wrath of angry townspeople, but rebukes it for its ferocity and calls men and wolf to live everafter in harmony.  And the animals of the nativity scene?  They are companions of the infant who is the Word made flesh.

So the authentic biblical and Catholic approach to “The Environment” is not to see it coldly and scientifically. Rather, in the fashion of St. Francis, Catholics should approach it as the expression of the Father’s beauty, as the gift of the Father’s love, as an icon, a window to the new creation.  Reckless exploitation would never fit with such a vision.  But neither would some secular environmentalism.