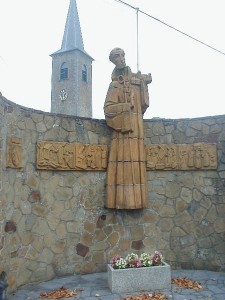 Statue of Saint Gerard, behind which stands the church of Saint Gérard.

ST. GERARD was of a noble family of the county of Namur, France. An engaging sweetness of temper, and a strong inclination to piety and devotion, gained him from the cradle the esteem and affection of every one. Having been sent on an important mission to the Court of France, he was greatly edified at the fervor of the monks of St. Denis, at Paris, and earnestly desired to consecrate himself to God with them.

Returning home, he settled his temporal affairs, and went back with great joy to St. Denis’. He had lived ten years with great fervor in this monastery, when in 931 he was sent by his abbot to found an abbey upon his estate at Brogue, three leagues from Namur. He settled this new abbey, and then built himself a little cell near the church, and lived in it a recluse until God called him to undertake the reformation of many monasteries, which he did successfully. When he had spent almost twenty years in these zealous labors, he shut himself up in his cell, to prepare his soul to receive the recompense of his labors, to which he was called on the 3d of October in 959.

Reflection.—Though we are in the world, let us strive to separate ourselves from it and consecrate ourselves to God, remembering that “the world passeth away, but he that doth the will of God abideth forever.”