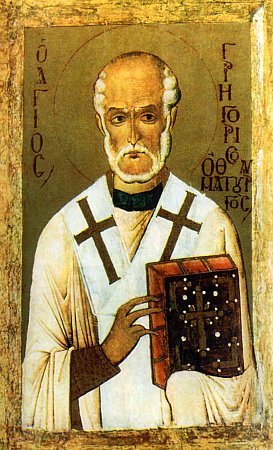 ST. GREGORY was born in Pontus, of heathen parents. In Palestine, about the year 231, he studied philosophy under the great Origen, who led him from the pursuit of human wisdom to Christ, Who is the Wisdom of God. Not long after, he was made Bishop of Neo Cæsarea in his own country.

As he lay awake one night an old man entered his room, and pointed to a lady of superhuman beauty, and radiant with heavenly light. This old man was St. John the Evangelist, and the lady told him to give Gregory the instruction he desired. Thereupon he gave St. Gregory a creed which contained in all its fulness the doctrine of the Trinity. St. Gregory set it in writing, directed all his preaching by it, and handed it down to his successors.

Strong in this faith, he subdued demons; he foretold the future. At his word a rock moved from its place, a river changed its course, a lake was dried up. He converted his diocese, and strengthened those under persecution. He struck down a rising heresy; and, when he was gone, this creed preserved his flock from the Arian pest. St. Gregory died in the year 270.

Reflection.—Devotion to the blessed Mother of God is the sure protection of faith in her Divine Son. Every time that we invoke her, we renew our faith in the Incarnate God; we reverse the sin and unbelief of our first parents; we take our part with her who was blessed because she believed.