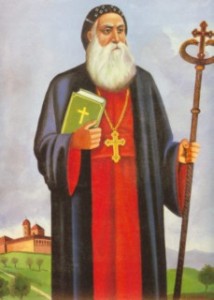 THIS eminent Saint and glorious Doctor of the Syriac Church was a native of Nisibis, in Mesopotamia. In his youth, entering the world, he trembled at the sight of its vices and the slippery path of its pleasures, and he thought it the safer part to strengthen himself in retirement, that he might afterward be the better able to stand his ground in the field. He accordingly chose the highest mountain for his abode, sheltering himself in a cave in the winter, and the rest of the year living in the woods, continually exposed to the open air. Notwithstanding his desire to live unknown to men, he was discovered, and many were not afraid to climb the rugged rocks that they might recommend themselves to his prayers and receive the comfort of his spiritual advice. He was favored with the gifts of prophecy and miracles in an uncommon measure.

One day, as he was travelling, he was accosted by a gang of beggars, with the view of extorting money from him under pretence of burying their companion, who lay stretched on the ground as if he were dead. The holy man gave them what they asked, and “offering up supplications to God as for a soul departed, he prayed that his Divine Majesty would pardon him the sins he had committed whilst he lived, and that he would admit him into the company of the Saints.” As soon as the Saint was gone by, the beggars, calling upon their companion to rise and take his share of the booty, were surprised to find him really dead. Seized with sudden fear and grief, they shrieked in the utmost consternation, and immediately ran after the man of God, cast themselves at his feet, confessed the cheat, begged forgiveness, and besought him by his prayers to restore their unhappy companion to life, which the Saint did.

The most famous miracle of our Saint was that by which he protected his native city from the barbarians. Sapor II., the haughty King of Persia, besieged Nisibis with the whole strength of his empire, whilst our Saint was Bishop. The Bishop would not pray for the destruction of any one, but he implored the Divine Mercy that the city might be delivered from the calamities of so long a siege. Afterward, going to the top of a high tower, and turning his face towards the enemy, and seeing the prodigious multitude of men and beasts which covered the whole country, he said, “Lord, Thou art able by the weakest means to humble the pride of Thy enemies; defeat these multitudes by an army of gnats.” God heard the humble prayer of His servant. Scarce had the Saint spoken those words, when whole clouds of gnats and flies came pouring down upon the Persians, got into the elephants’ trunks and the horses’ ears and nostrils, which made them chafe and foam, throw their riders, and put the whole army into confusion and disorder. A famine and pestilence, which followed, carried off a great part of the army; and Sapor, after lying above three months before the place, set fire to all his own engines of war, and was forced to abandon the siege and return home with the loss of twenty thousand men.

Sapor received a third setback under the walls of Nisibis, in 359, upon which he turned his arms against Amidus, took that strong city, and put the garrison and the greatest part of the inhabitants to the sword. The citizens of Nisibis attributed their preservation to the intercession of their glorious patron, St. James, although he had already gone to his reward. He died in 350.