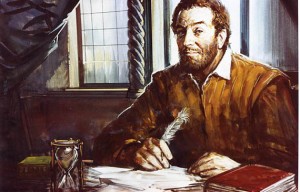 ST. JEROME EMILIANI was a member of one of the patrician families of Venice, and, like many other Saints, in early life a soldier. He was appointed governor of a fortress among the mountains of Treviso, and whilst bravely defending his post, was made prisoner by the enemy. In the misery of his dungeon he invoked the great Mother of God, and promised, if she would set him free, to lead a new and a better life. Our Lady appeared, broke his fetters, and led him forth through the midst of his enemies.

At Treviso he hung up his chains at her altar, dedicated himself to her service, and on reaching his home at Venice devoted himself to a life of active charity. His special love was for the deserted orphan children whom, in the times of the plague and famine, he found wandering in the streets. He took them home, clothed and fed them, and taught them the Christian truths. From Venice he passed to Padua and Verona, and in a few years had founded orphanages through Northern Italy.

Some pious clerics and laymen, who had been his fellow-workers, fixed their abode in one of these establishments, and devoted themselves to the cause of education. The Saint drew up for them a rule of life and thus was founded the Congregation, which still exists, of the Clerks Regular of Somascha. St. Jerome died February 8, 1537, of an illness which he had caught in visiting the sick.

Reflection.—Let us learn from St. Jerome to exert ourselves in behalf of the many hundred children whose souls are perishing around us for want of some one to show them the way to heaven.