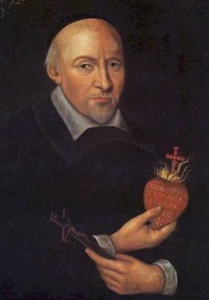 St. John Eudes, born at Ri, Orne, was a brother of the French historian François Eudes de Nézeray. At the age of fourteen he took a vow of chastity.  After studying with the Jesuits at Caen he joined the Oratorians on 25 March 1623. His masters and models in the spiritual life were Pierre de Bérulle and the mystic Charles de Condren. He was ordained a priest on 20 December 1625 and began his priestly life with heroic labours for the victims of the plague, which was ravaging the country.

Father Eudes became famous as a missionary. He was called by Jean-Jacques Olier “the prodigy of his age”. In 1641 he founded the Sisters of Our Lady of Charity of the Refuge, to provide a refuge for prostitutes who wished to do penance. The society was approved by Pope Alexander VII on 2 January 1666. It later also included a convent which in 1829 influenced Saint Mary Euphrasia Pelletier who modeled her worldwide missions after Eudes.With the approbation of Cardinal de Richelieu and a great number of others, Father Eudes severed his connection with the Oratory to establish the Congregation of Jesus and Mary (Eudists) for the education of priests and for missionary work. This congregation was founded at Caen on 25 March 1643, and was considered a most important and urgent work.

Father Eudes, during his long life, preached not less than 110 missions, three at Paris, one at Versailles, one at St-Germaine-en-Laye, and the others in different parts of France. Normandy was the principal theatre of his apostolic labours. In 1674 he obtained from Pope Clement X six bulls of indulgences for the Confraternities of the Sacred Heart already erected or to be erected in the seminaries.

He also established the Society of the Heart of the Mother Most Admirable — which resembles the Third Orders of St. Francis and St. Dominic. This society now numbers from 20,000 to 25,000 members. Father Eudes dedicated the seminary chapels of Caen and Coutances to the Sacred Hearts. The feast of the Holy Heart of Mary was celebrated for the first time in 1648, and that of the Sacred Heart of Jesus in 1672, each as a double of the first class with an octave.

The Mass and Office proper to these feasts were composed by Father Eudes, who thus briefly preceded his contemporary the Saint Marguerite Marie Alacoque in establishing the devotion to the Sacred Hearts. For this reason, Pope Leo XIII, in proclaiming his virtues heroic in 1903, gave him the title of “Author of the Liturgical Worship of the Sacred Heart of Jesus and Holy Heart of Mary”. He believed in the unity of the hearts of Jesus and Mary and wrote:

Father Eudes wrote a number of books remarkable for elevation of doctrine and simplicity of style.  He died at Caen on 19 August 1680.