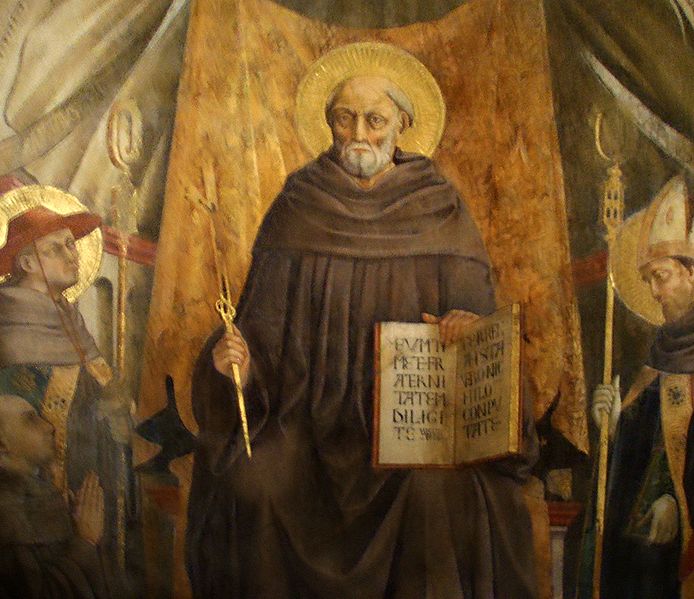 ST. JOHN GUALBERT was born at Florence, A. D. 999. Following the profession of arms at that troubled period, he became involved in a blood-feud with a near relative. One Good Friday, as he was riding into Florence accompanied by armed men, he encountered his enemy in a place where neither could avoid the other. John would have slain him; but his adversary, who was totally unprepared to fight, fell upon his knees with his arms stretched out in the form of a cross, and implored him, for the sake of Our Lord’s holy Passion, to spare his life. St. John said to his enemy, “I cannot refuse what you ask in Christ’s name. I grant you your life, and I give you my friendship. Pray that God may forgive me my sin.”

Grace triumphed. A humble and changed man, he entered the Church of St. Miniato, which was near; and whilst he prayed, the figure of our crucified Lord, before which he was kneeling, bowed its head toward him as if to ratify his pardon. Abandoning the world, he gave himself up to prayer and penance in the Benedictine Order.

Later he was led to found the congregation called of Vallombrosa, from the shady valley a few miles from Florence, where he established his first monastery. Once the enemies of the Saint came to his convent of St. Salvi, plundered it, and set fire to it, and having treated the monks with ignominy, beat them and wounded them. St. John rejoiced. “Now,” he said, “you are true monks. Would that I myself had had the honor of being with you when the soldiers came, that I might have had a share in the glory of your crowns! ” He fought manfully against simony, and in many ways promoted the interest of the Faith in Italy. After a life of great austerity, he died whilst the angels were singing round his bed, July 11, 1073.

Reflection.—The heroic act which merited for St. John Gualbert his conversion was the forgiveness of his enemy. Let us imitate him in this virtue, resolving never to revenge ourselves in deed, in word, or in thought.