Trending Now
You are at:Home»Featured»St. John Paul II’s Rapprochement with Science: A Quest for Common Understanding
By Bob Kurland on October 22, 2015 Featured, Science 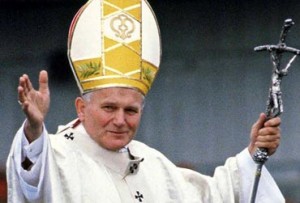 Among the many posts and articles on the canonization of St. John Paul II last year, there were few comments about his efforts to effect a rapprochement between the Church and science (notice the upper case and lack thereof).  The term “rapprochement” has been chosen with care: “an establishment or resumption of harmonious relations” (Oxford English Dictionary).

The term is applied to peace treaties after a state of war, and although the Catholic Church has not declared war on science, there are those scientists who do think there is such a war, and there are those advocates of scientism–that science explains all we need to know about the world–who have declared war on the Church. These last ignore the founding contribution of the Church to the establishment of science (see Stacy Trasanco’s Science was born of Christianity , and the contribution of Catholic Religious (Mendel, LeMaitre amongst many) to science in Fathers of Science.

There are three ways in which St. JP II tried to bring about this rapprochement: 1) redressing the Galileo Affair; 2) making the position of the Church on evolution clear and consistent with both dogma and science; 3) instituting conferences on how Divine Intervention might be manifested in several scientific disciplines.

The first two have been dealt with at some length in the blogosphere, so I’ll treat those only briefly. I’ll focus on the third, which has been an invaluable resource for me in my discussions of science and religion.

As George Sim Johnston puts it in his book, The Galileo Affair

“The Galileo affair is the one stock argument used to show that science and Catholic dogma are antagonistic. While Galileo’s eventual condemnation was certainly unjust a close look at the facts puts to rout almost every aspect of the reigning Galileo legend.” George Sim Johnston

Summarizing his arguments, one can say that both Galileo and some Church officials were at fault, but it was a different time with different concerns. High officials in the Church, initially sympathetic to Galileo, were defending orthodoxy against the onslaught of the Reformation.

Galileo was condemned not for his advocacy of the Copernican theory, per se, but for his advocacy that Scripture was to be interpreted loosely (even though the same had been done by St. Augustine). And his science was wrong–circular orbits for the planets and his theory of tides.  All this is dealt with at greater length in the article linked above.

Nevertheless, this one piece of history has been the cannon used in the war of materialists and scientists against the Church, in their perceived conflict between the Church and Science. In 1979, St. JP II asked the Pontifical Academy of Sciences to make an in-depth study of the affair. Commenting on their report in 1992, he said, as an apology, explaining what had happened:

“Thanks to his intuition as a brilliant physicist and by relying on different arguments, Galileo, who practically invented the experimental method, understood why only the sun could function as the centre of the world, as it was then known, that is to say, as a planetary system. The error of the theologians of the time, when they maintained the centrality of the Earth, was to think that our understanding of the physical world’s structure was, in some way, imposed by the literal sense of Sacred Scripture….”  St. John Paul II, Address to Pontifical Academy of Sciences, as quoted in  L’Osservatore Romano N. 44 (1264) – November 4, 1992

Liberal news media made much of this apology, but it was only recognizing in a formal way earlier actions of the Church–removing Galileo’s book from the index, setting up a Vatican Observatory — and setting the affair in a historical context. What was important was his  affirmation in this apology that science and the Church both have domains of truth, which do not deny each other–as in his address on evolution, “Truth cannot contradict Truth”

In his 1996 address to the Pontifical Academy of Science St. JP II, expanding on the doctrine set forth by Pope Pius XII in his encyclical Humani Generis, asserted that

“There is no conflict between evolution and the doctrine of the faith regarding man and his vocation, provided that we do not lose sight of certain fixed points.”

Among these points is the most important requirement that the soul of man is endowed by God (the Holy Spirit) and not materially constructed:

“It is by virtue of his eternal soul that the whole person, including his body, possesses such great dignity. Pius XII underlined the essential point: if the origin of the human body comes through living matter which existed previously, the spiritual soul is created directly by God (“animas enim a Deo immediate creari catholica fides non retimere iubet”). (Humani Generis)”

He also showed much insight in commenting on the scientific aspects of evolution, that while evolution (the descent of species) is a fact, there is more than one theory–mechanism–proposed to explain evolution.

“As a result, the theories of evolution which, because of the philosophies which inspire them, regard the spirit either as emerging from the forces of living matter, or as a simple epiphenomenon of that matter, are incompatible with the truth about man. They are therefore unable to serve as the basis for the dignity of the human person.”

It is unfortunate that both scientists and lay persons do not share St. JP II’s understanding, but equate the Darwinian model for evolution–“survival of the fittest”–with evolution, the descent of species. And as with his apology for the Galileo affair, the liberal media made much of his acknowledgement that evolution is a fact, but neglected the historical and theological context which he brought to that statement.

In 1987, St. JP II instituted the first of a series of conferences, held at the Papal Summer Residence, Castelgandalfo, bringing together scientists, philosophers and theologians. Not all of these were Catholic and, indeed, a few were not even theists, as the term is commonly understood. He addressed the conferees at this first meeting (“Our Knowledge of God and Nature: Physics, Philosophy and Theology”) via a letter to George Coyne, SJ, Director of the Vatican Observatory. (I recommend the reader go to the link for that letter, to get the full import of St. JP II’s thoughts on science and the Church.)

He stressed first, as in the quote at the beginning of this article, the contributions science could make to the Church, and the Church to science, “Science can purify religion from error and superstition; religion can purify science from idolatry and false absolutes.”

“The unity we perceive in creation on the basis of our faith in Jesus Christ as Lord of the universe…seems to be reflected and even reinforced in  what  contemporary science is revealing to us….Contemporary physics forms a striking example.  The quest for unification of all four fundamental physical forces–gravitation, electromagnetism, the strong and weak nuclear interactions–has met with increasing success….In the life sciences, too, something similar has happened.  Molecular biologists have probed the structure of living material…(and) have discovered that the same underlying constituents (genes and proteins coded by genes) serve in the make-up of all living organisms on earth.” St. John Paul II, letter to George Coyne.

Although St. JPII argued that science and theology could, and should, mutually enrich the other, he did not think they should be unified, as in unified science or unified theology:

“By encouraging openness between the Church and the scientific communities, we are not envisioning a disciplinary unity between theology and science like that which exists within a given scientific field or within theology proper….The Church does not propose that science should become religion or religion science…To be more specific, both religion and science must preserve their autonomy and their distinctiveness….Christianity possesses the source of its justification within itself  and does not expect science to constitute its primary apologetic (emphasis added).   Science must bear witness to its own worth….neither ought to assume that it forms a necessary premise for the other.”   ibid.

The quotation above reminds me of my encounters playing harmony parts (tenor and bass) in our Church instrumental group:  the musical lines are distinct, for the most part different,  but the harmony enriches the melody, as does science, theology.

Although St. JP II respected the integrity and distinctiveness of science and theology, he did emphasize that they could and should enrich each other in areas such as cosmology and molecular biology, and, accordingly, set up conferences to effect such enrichment. He stressed the importance of putting scientific findings in a proper context, and the difficulty of doing such in our contemporary setting:

“For the truth of the matter is that the Church and the scientific community will inevitably interact….Christians will inevitably assimilate the prevailing ideas about the world, and these are inevitably shaped by science.  The only question is whether they will do this critically or unreflectively, with depth and nuance or with a shallowness that debases the Gospel and leaves us ashamed before history.   Scientists, like all human beings, will make decisions on what gives value and meaning to their lives and to their work.   This they will do well or poorly, with the reflective depth that theological wisdom can help them attain, or with an unconsidered absolutizing of their results beyond their reasonable and proper limits.” ibid.

I’ll have to add that all the insights above (with the possible exception of the musical analogy) are those of  St. John Paul II.   I’ve been blessed in being able to bring these to the attention of others.

Finally, as  a postscript, here is a list of these conferences and links to the proceedings published by the Vatican Observatory and University of Notre Dame Press. On the web page of the Center for Natural Sciences and Theology that lists the books, you will see images of each book.  If you click on the book image, there will appear article headings at the right of the web-page, which will link to the article of interest.

Quantum Cosmology and the Laws of Nature–Scientific Perspectives on Divine Action.

Neuroscience and the Person–Scientific Perspectives on Divine Action.