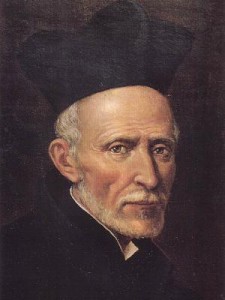 ST. JOSEPH CALASANCTIUS was born in Aragon, in 1556. When only five years old, he led a troop of children through the streets to find the devil and kill him. He became a priest, and was engaged in various reforms.  Once he heard a voice saying, “Go to Rome,” and saw a vision of many children who were being taught by him and by a company of angels.

When he reached Rome, his heart was moved by the vice and ignorance of the impoverished children.  Their need mastered his humility, and he founded the Order of Clerks Regular of the Pious Schools.

He himself provided all that was necessary for the education of the children, receiving nothing from them in payment, and there were soon about a thousand pupils of every rank under his care. Each lesson began with prayer. Every half-hour devotion was renewed by acts of faith, hope, and charity, and towards the end of school-time the children were instructed in the Christian doctrine. They were then escorted home by the masters, so as to escape all harm by the way.

But enemies arose against Joseph from among his own subjects. They accused him to the Holy Office, and at the age of eighty-six he was led through the streets to prison. At last the Order was reduced to a simple congregation. It was not restored to its former privileges till after the Saint’s death. Yet he died full of hope. “My work,” he said, “was done solely for the love of God.”

Reflection.—”My children,” said the Curé of Ars, “I often think that most of the Christians who are lost are lost for want of instruction; they do not know their religion well.”