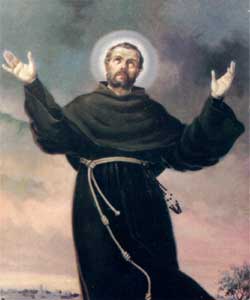 Joseph was born in Cupertino, Italy in 1603. The son of pious parents, he early attained to the love of God. His boyhood and youth were passed in greatest simplicity and in innocent pastimes. But after the Virgin Mother of God had freed him from a long and painful illness – one which he had borne with very great patience – he devoted himself wholly to good works and pious practices.

Then God called him to a higher life. In order to be more closely united with him, Joseph determined to join the Franciscan, or as it is called, the Seraphic Order. After several attempts he obtained his wish and was admitted among the Friars Minor at the convent of Grotella. Because of his lack of formal education Joseph was first a lay brother. Later, though the intervention of divine Providence, he was allowed to take his place among the choir-brothers. Once he had taken solemn vows he was ordained priest.

Thereupon he set out to build for himself a way of life of still greater perfection. To this end he renounced all earthly possessions, all earthly affections, even the very necessities of life. He afflicted his body with great austerities and penances: hairshirts, disciplines, chains. He was consumed with great zeal for souls, an he strove most assiduously in every way for the salvation of all. His love for neighbor was extended equally to the poor, the sick, and to those who suffered any affliction.

Reflection. God alone is simple by essence; those who become as little children are most like to God.