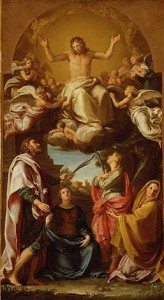 St. Julian and St. Basilissa (early 4th century) though married, lived by mutual consent in perpetual chastity.  They sanctified themselves by the most perfect exercises of an ascetic life, and employed their revenues in relieving the poor and the sick. For this purpose they converted their house into a kind of hospital, in which they sometimes entertained a thousand poor people.

Basilissa attended those of her sex, in separate lodgings from the men; these were taken care of by Julian, who from his charity is named the Hospitalarian. Egypt, where they lived, had then begun to abound with examples of persons who, either in the cities or in the deserts, devoted themselves to the most perfect exercises of charity, penance, and mortification.  Basilissa, after having withstood seven persecutions, died in peace; Julian survived her many years and received the crown of a glorious martyrdom, together with Celsus, a youth, Antony, a priest, Anastasius, and Marcianilla, the mother of Celsus.

Many churches and hospitals in the East, and especially in the West, bear the name of one or other of these martyrs. Four churches at Rome, and three out of five at Paris, which bear the name of St. Julian, were originally dedicated under the name of St. Julian, the Hospitalarian and martyr. In the time of St. Gregory the Great, the skull of St. Julian was brought out of the East into France, and given to Queen Brunehault; she gave it to the nunnery which she founded at Étampes; part of it is at present in the monastery of Morigny, near Étampes, and part in the church of the regular canonesses of St. Basilissa at Paris.

Reflection.—God often rewards men for works that are pleasing in His sight by giving them grace and opportunity to do other works higher still. St. Augustine said, “I have never seen a compassionate and charitable man die a bad death.”