Trending Now
You are at:Home»Church Street»Saint of the Day»St. Katharine Drexel, Foundress
By Catholic Lane Administrator on March 3, 2015 Saint of the Day 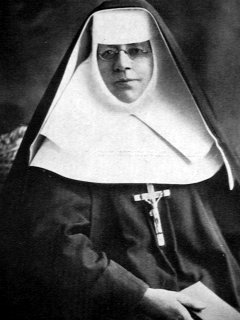 Born in Philadelphia, Pennsylvania, U.S.A. on 26 November 1858, Katharine was the second daughter of Francis Anthony Drexel, a wealthy banker, and his wife, Hannah Jane. The latter died a month after Katharine’s birth, and two years later her father married Emma Bouvier, who was a devoted mother, not only to her own daughter Louisa (born 1862), but also to her two step-daughters. Both parents instilled into the children by word and example that their wealth was simply loaned to them and was to be shared with others.

Katharine was educated privately at home; she traveled widely in the United States and in Europe. Early in life she became aware of the plight of the Native Americans and the Blacks; when she inherited a vast fortune from her father and step-mother, she resolved to devote her wealth to helping these disadvantaged people. In 1885 she established a school for Native Americans at Santa Fe, New Mexico.

Later, during an audience with Pope Leo XIII, she asked him to recommend a religious congregation to staff the institutions which she was financing. The Pope suggested that she herself become a missionary, so in 1889 she began her training in religious life with the Sisters of Mercy at Pittsburgh.

In 1891, with a few companions, Mother Katharine founded the Sisters of the Blessed Sacrament for Indians and Colored People. The title of the community summed up the two great driving forces in her life—devotion to the Blessed Sacrament and love for the most deprived people in her country.

Requests for help reached Mother Katharine from various parts of the United States. During her lifetime, approximately 60 schools were opened by her congregation. The most famous foundation was made in 1915; it was Xavier University, New Orleans, the first such institution for Black people in the United States.

In 1935 Mother Katharine suffered a heart attack, and in 1937 she relinquished the office of superior general. Though gradually becoming more infirm, she was able to devote her last years to Eucharistic adoration, and so fulfil her life’s desire. She died at the age of 96 at Cornwell Heights, Pennsylvania, on 3 March 1955. Her cause for beatification was introduced in 1966; she was declared Venerable by Pope John Paul II on 26 January 1987, by whom she was also beatified on 20 November 1988.
Taken from:
L’Osservatore Romano
Weekly Edition in English
21 November 1988, page 2