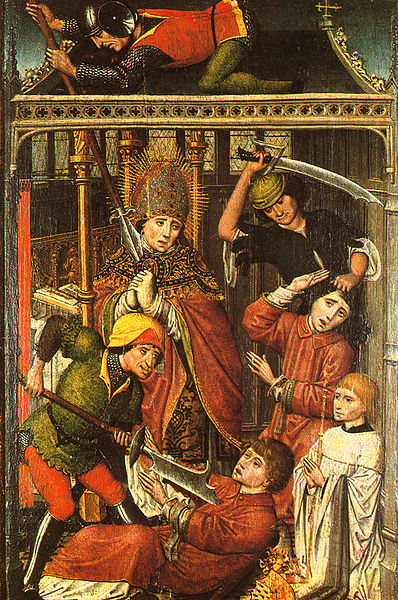 ST. LAMBERT was a native of Maestricht, in present day Netherlands. His father intrusted his education to the holy Bishop St. Theodard, and on that good man being assassinated, Lambert was chosen his successor.

A revolution breaking out which overturned the kingdom of Austrasia, our Saint was banished from his see on account of his devotion to his sovereign. He retired to the monastery of Stavelo, and there obeyed the rule as strictly as the youngest novice could have done. One instance will suffice to show with how perfect a sacrifice of himself he devoted his heart to serve God. As he was rising one night in winter to his private devotions, he happened to let fall his wooden sandal or slipper. The abbot, without asking who had caused the noise, gave orders that the offender should go and pray before the cross, which stood before the church door. Lambert, without making any answer, went out as he was, barefoot, and covered only with his hair shirt; and in this condition he prayed, kneeling before the cross, where he I was found some hours after.

At the sight of the holy bishop the abbot and the monks fell on the ground and asked his pardon. “God forgive you,” said he, “for thinking you stand in need of pardon for this action. As for myself, is it not in cold and nakedness that, according to St. Paul, I am to tame my flesh and to serve God?”

While St. Lambert enjoyed the quiet of holy retirement, he wept to see the greatest part of the churches of France laid waste. In the mean time the political clouds began to break away, and Lambert was restored to his see, but his zeal in suppressing the many and notorious disorders which existed in his diocese led to his assassination on the 17th of September, 709.

Reflection.—How noble and heroic is this virtue of fortitude! how necessary for every Christian, especially for a pastor of souls, that neither worldly views nor fears may ever in the least warp his integrity or blind his judgment!