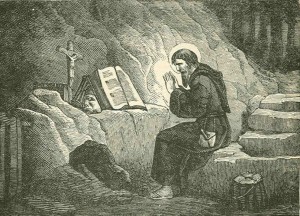 LEONARD, one of the chief personages of the court of Clovis, and for whom this monarch had stood as sponsor in baptism, was so moved by the discourse and example of St. Remigius that he relinquished the world in order to lead a more perfect life. The Bishop of Rheims having trained Leonard to virtue, he became the apostle of such of the Franks as still remained pagans.

Fearing, however, that he might be summoned to the court by his reputation for sanctity, he withdrew secretly to the monastery of Micy, near Orleans, and afterwards to the solitude of Noblac near Limoges. His charity not allowing him to remain inactive while there was so much good to be done, he undertook the work of comforting prisoners, making them understand that the captivity of sin was more terrible than any mere bodily constraint. He won over a great many of these unfortunate persons, which gained for him many disciples, in whose behalf he founded a new monastery. St. Leonard died about the year 550.

Reflection.—”The wicked shall be taken with his own iniquities, and shall be held by the cords of his own sin.”