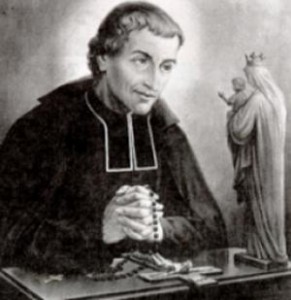 Few men have contributed so much to spread Marian devotion as Louis-Marie Grignion de Montfort. He was a popular and vigorous missionary from the west of France, who died at the age of 43 in 1716, exhausted by his sermons and his penances. His famous books such as Mary’s Secret or The Treaty of True Devotion, which became known a long time after his death, had a considerable influence. “It is also through Mary that we must approach God and unite ourselves perfectly and strictly to his Majesty, without fearing rejection”.

“Only God!” is one of St. de Monfort’s key formulas. For him, everything comes from the Father and everything returns to the Father. Mary is at the heart of this and rightly so: “When someone has once found Mary, and through Mary, Jesus and through Jesus, God the Father, he has found all that is good…all of God’s grace and friendship, all truth against lies, all ease and victory against lies, all ease and victory against difficulties of salvation, all sweetness and all joy in the bitterness of life”.

The fact of serving Mary does not lessen the importance of the Cross but it presents it in a totally different way. “Since Mary is the mother of the living, she gives all her children pieces of the Tree of Life, which is Jesus’ cross.  St. Louis Louis de Monfort is the inspiration for the Legion of Mary.