Trending Now
You are at:Home»Learn & Live the Faith»Apologetics»St. Luke, Evangelist and Historian
By Mary Kochan on October 18, 2015 Apologetics, Saint of the Day - Ex Form 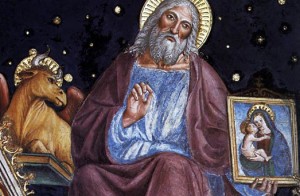 Today is the Feast of St. Luke the evangelist. Luke was a native of Antioch and unlike the other New Testament writers, was not a Jew, but a Greek.

When we look for Luke in the Scriptures, we first come across his Gospel, but from a historical perspective, his first mention is not in the Gospel of Luke, but in the book of Acts, chapter 16 verses 8-10. Verse 8 describes St. Paul traveling to Troas. There, recounted in verse 9, he has a vision of a Macedonian man asking for help. Recognizing that this is a call from God to take his Gospel preaching into new territory, St. Paul determines to go to Macedonia. And right there in verse 10 we see Luke appear as he writes: “And when he had seen the vision, immediately we sought to go on to Macedonia.” That was where St. Luke joined up with the travels of St. Paul. And boy, are we glad he did.

We can imagine the two of them on the voyages to follow, passing sailing time with St. Paul recounting for the ear and perhaps the pen of Dr. Luke, the adventures he had that are recorded for us beginning in Acts 7:28.

St. Luke was not merely a traveling companion for the Apostle, he was himself a preacher of the Gospel, and St. Paul refers to him as “fellow laborer.” St. Paul also calls him “the beloved physician.” But what situates St. Luke in his treasured position is neither his work as a doctor, nor even his preaching, but his work as a historian.

The extent of his New Testament writing is exceeded only by the 14 letters of St. Paul, and he records six miracles and 18 parables not found in the other Gospels. He is the only Gospel-writer to give us intimate glimpses of Mary’s Divine Maternity and Jesus’ infancy and youth within the Holy Family, information which could only have come from Mary herself.

Of course to call St. Luke a historian is to insist that he wrote history, not fairy tales. We have all heard fairy tales. “Once upon a time,” is how they start. Or perhaps, “Long, long ago, in a galaxy far, far away.”

But not St. Luke; he screws his Gospel right into known human history — the history of the Roman Empire (Lk 1:5, 2:1-2). And the more we uncover of that history, the more archeology is done in the regions encompassed by St. Luke’s chronicles, the more verification is found of his stunning accuracy. His accounts of the voyages of St. Paul are so detailed that you can open to the back of many Bibles and see a map with the itinerary of each trip.

As our first pope put it: “[W]e did not follow cleverly devised myths when we made known to you the power and coming of our Lord Jesus Christ, but we were eyewitnesses of His majesty” (2 Pt 1:16).

St. Luke found those eyewitnesses and he wrote down their accounts. Thanks to the power of his prose, reading his Gospel and the book of Acts is almost like being eyewitnesses ourselves.