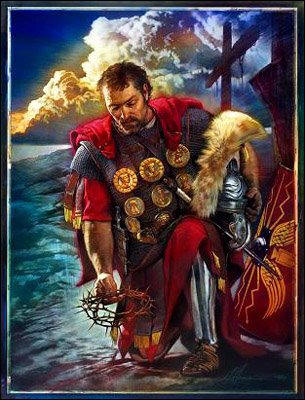 THE birthday of the Emperor Maximian Herculeus, in the year 298, was celebrated with extraordinary feasting and solemnity. Marcellus, a Christian centurion or captain in the legion of Trajan, then posted in Spain, not to defile himself with taking part in those impious abominations, left his company, declaring aloud that he was a soldier of Jesus Christ, the eternal King.

He was at once committed to prison. When the festival was over, Marcellus was brought before a judge, and, having declared his faith, was sent under a strong guard to Aurelian Agricolaus, vicar to the prefect of the prætorium, who passed sentence of death upon him. St. Marcellus was forthwith led to execution, and beheaded on the 30th of October. Cassian, the secretary or notary of the court, refused to write the sentence pronounced against the martyr, because it was unjust. He himself was immediately hurried to prison, and was beheaded, about a month after Marcellus, on the 3d of December, 298.

Reflection.—”We are ready to die rather than to transgress the laws of God!” exclaimed Judas Maccabeus:

Better for us to die than watch
the ruin of our nation and our
holy place [1 Maccabees 3:59]

This sentiment should ever be that of a Christian in presence of temptation.  It represents also the true Christian spirit of patriotism.