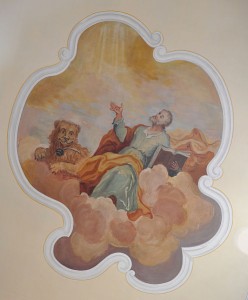 ST. MARK was converted to the Faith by the Prince of the Apostles, whom he afterwards accompanied to Rome, acting there as his secretary or interpreter. When St. Peter was writing his first epistle to the churches of Asia, he affectionately joins with his own salutation that of his faithful companion, whom he calls “my son Mark.”

The Roman people entreated St. Mark to put in writing for them the substance of St. Peter’s frequent discourses on Our Lord’s life. This the Evangelist did under the eye and with the express sanction of the apostle, and every page of his brief but graphic gospel so bore the impress of St. Peter’s character, that the Fathers used to name it “Peter’s Gospel”

St. Mark was then sent to Egypt to found the Church of Alexandria. Here his disciples became the wonder of the world for their piety and asceticism, so that St. Jerome speaks of St. Mark as the father of the anchorites, who at a later time thronged the Egyptian deserts. Here, too, he set up the first Christian school, the fruitful mother of many illustrious doctors and bishops. After governing his see for many years, St. Mark was one day seized by the heathen, dragged by ropes over stones, and thrown into prison. On the morrow the torture was repeated, and having been consoled by a vision of angels and the voice of Jesus, St. Mark went to his reward.

In the 9th century, Christians smuggled the Saint’s body out of Alexandria hidden in a cask of pork, which passed by Muslim customs officials unwilling to touch the contents. The relic remains in St. Mark’s Cathedral, Venice, to the present day.

It is to St. Mark that we owe the many slight touches which often give such vivid coloring to the Gospel scenes, and help us to picture to ourselves the very gestures and looks of our blessed Lord. It is he alone who notes that in the temptation Jesus was “with the beasts;” that He slept in the boat “on a pillow;” that He “embraced” the little children. He alone preserves for us the commanding words “Peace, be still!” by which the storm was quelled; or even the very sounds of His voice, the “Ephpheta” and “Talitha cumi,” by which the dumb were made to speak and the dead to rise. So, too, the “looking round about with anger,” and the “sighing deeply,” long treasured in the memory of the penitent apostle, who was himself converted by his Savior’s look, are here recorded by his faithful interpreter.

Reflection.—Learn from St. Mark to keep the image of the Son of man ever before your mind, and to ponder every syllable which fell from His lips.