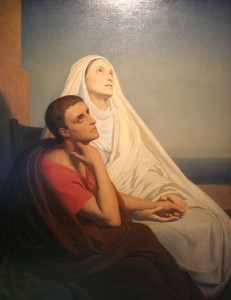 MONICA, the mother of St. Augustine, was born in 332. A, a girlhood of singular innocence and piety, she was given in marriage to Patritius, a pagan. She at once devoted herself to his conversion, praying for him always, and winning his reverence and love by the holiness of her life and her affectionate forbearance. She was rewarded by seeing him baptized a year before his death.

When her son Augustine went astray in faith and manners her prayers and tears were incessant. She was once very urgent with a learned bishop that he would talk to her son in order to bring him to a better mind, but he declined, despairing of success with one at once so able and so headstrong. However, on witnessing her prayers and tears, he bade her be of good courage; for it might not be that the child of those tears should perish.

By going to Italy, Augustine could for a time free himself from his mother’s importunities; but he could not escape from her prayers, which encompassed him like the providence of God. She followed him to Italy, and there by his marvellous conversion her sorrow was turned into joy. At Ostia, on their homeward journey, as Augustine and his mother sat at a window conversing of the life of the blessed, she turned to him and said, “Son, there is nothing now I care for in this life. What I shall now do or why I am here, I know not. The one reason I had for wishing to linger in this life a little longer was that I might see you a Catholic Christian before I died. This has God granted me superabundantly in seeing you reject earthly happiness to become His servant. What do I here?” A few days afterwards she had an attack of fever, and died in the year 387.

Reflection.—It is impossible to set any bounds to what persevering prayer may do. It gives man a share in the Divine Omnipotence. St. Augustine’s soul lay bound in the chains of heresy and impurity, both of which had by long habit grown inveterate. They were broken by his mother’s prayers.